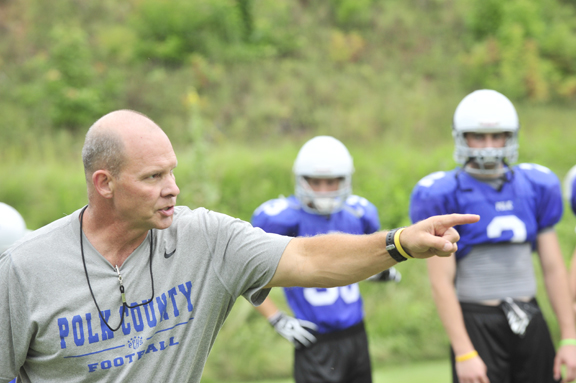 After a dozen years of solid success as head coach of Polk County High School’s football, Bruce Ollis has been interviewed for the same position at T.L. Hanna High School in Anderson, SC.

T.L. Hanna officials, who contacted Ollis, are expected to make their decision on Jan. 21. A press conference is scheduled Jan. 22

Ollis, who coached his three sons at Polk, said that before being contacted by T.L. Hanna officials, “I was not looking to leave the job here.”

He told his players of this situation on Thursday, Jan. 9.

“The story was breaking,” said Ollis. “It wouldn’t be fair to them (if he didn’t inform his players).”

Ollis, who played football at Presbyterian College, said he and Thomas A. Wilson, the current T.L. Hanna superintendent, were college teammates and friends.

After leading the Wolverines to a 9-4 record in 2013 season, including going 6-0 in the Western Highlands Conference for the WHC title and Polk’s first perfect conference season, Ollis was named WHC Coach of the Year, and later, Western North Carolina High School Coach of the Year.

Late in 2013, T.L. Hanna officials informed six-year head football coach Kenya Fouch that, after the Yellowjackets’ 4-7 season, his contract would not be renewed.

The 2003 movie “Radio” was based on the true story of former T.L. Hanna football coach Harold Jones, and a mentally-challenged young man, James Robert “Radio” Kennedy, who attended T.L. Hanna, and eventually helped coach the school’s football and basketball teams.