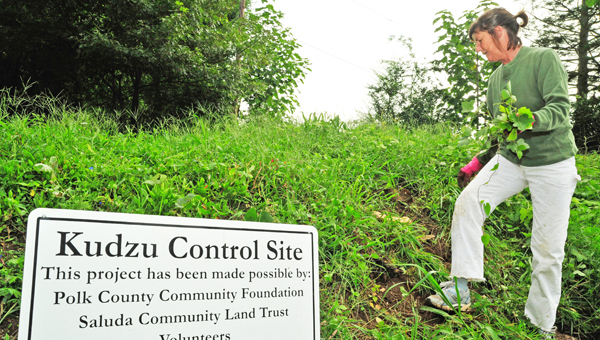 SCLT board member Nora Parks Anderson shown removing kudzu at a site in Saluda, near a sign that describes the project. (photo by Mark Schmerling)

Although kudzu has earned the nickname “The vine that ate the South,” members of Saluda Community Land Trust (SCLT) have worked to control the growth of this aggressive, imported invasive plant in several locations around Saluda over the past five years.

Support from the Polk County Community Foundation has helped pay for tools, signs and for some additional labor (SCLT members are all volunteers).

SCLT’s kudzu removal project locations include the hillside behind the public parking area (where tailgate markets are held on Fridays); the so-called “Graham Triangle,” behind the Blue Gypsy, Manna Cabana and Green River Outfitters, off Main Street; near the Saluda Inn; the intersection of Ozone Drive and Thompson Road; the nature park; and behind Saluda School. The Ozone/Thompson location shows the absence of invasive plants – proof it can be done.

SCLT’s interest in kudzu removal dates to one of the group’s meetings, where members read an article on kudzu, and learned of the Spartanburg Kudzu Coalition that took on the entrenched and conducted its “Kudzu Kollege” to help others fight the plant. The coalition uses non-chemical methods to control kudzu.

At the “Kollege,” SCLT members learned how to identify kudzu and how to control it. They learned that de-crowning each plant (separating the crown at the base of the plant, from the roots) is key.

“It’s the most effective way of getting rid of it (kudzu),” said SCLT board member Nora Parks Anderson.