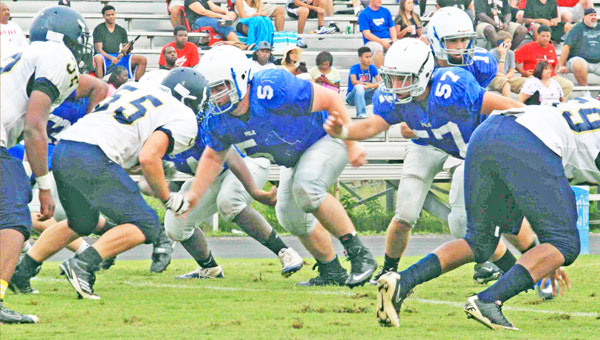 Polk County and Spartanburg high schools rarely meet in football competition, but the two varsity squads will line up against each other tonight, Friday, Aug. 16 at 7 p.m. to lead off the Border Showcase Classic IX at Gaffney (SC) High School.

The event will feature three match-ups, each a complete half game. At 8 p.m., it’s Erwin vs. Byrnes and at 9 p.m., Gaffney takes on Woodruff.

The event is the brainchild of Wolverines’ coach Bruce Ollis, now in his 34th year of coaching, and his 12th at Polk.

“I have coached in a lot of different places,” said Ollis, “and around a lot of quality players.”

For him, it was natural to bring many of those quality players into head-to-head competition.

“It was just something I felt would enhance high school football in this area,” he said. He felt that the Border Showcase would bring together teams that seldom played against each other.

Gardner-Webb University in Boiling Springs hosted the first two events. Since then, hosts have included Byrnes, Crest, Gaffney, T.C. Robertson and Shelby. In addition to giving players and coaches a chance to mix it up with new opponents, it gives, noted Ollis, a chance for each host school to take in some extra revenue. It also gives fans an opportunity to see new talent.

The first Border Showcase Classic featured eight teams, including a game between Polk and Broome.

“It was a big deal,” said Ollis, looking back on the first Classic. “Each game is a complete half, with referees and three time-outs. It’s a real game for one complete half.”

Parents, grandparents, coaches and youth are invited to attend a free educational program that is designed to protect young athletes.... read more