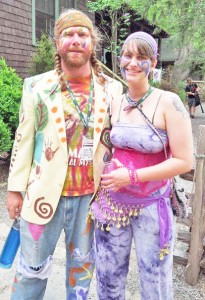 When Jon Cavin first laid eyes on his future wife, she had a roll of shiny new quarters in her hand to pay for her dinner, a celebration for the Gardening Crew at CooperRiis Healing Farm.

Cavin had been raised right by his father, a minister, and his mother, a music teacher. He paid for Briana McCallum’s dinner.

The next time he saw McCallum, she was walking a pit bull. She’d rescued the little dog from the center of the road at midnight on a snowy Christmas Eve. They began talking and soon realized that gardening, compassionate hearts and rescuing strays were only a small part of all they shared.

“We both have played music our whole lives,” Cavin said.

Together they have more than a dozen musical instruments. They both played music with the residents at CooperRiis and loved it.

“It’s a nonverbal form of bonding, and expressing feelings verbally can be difficult,” McCallum said. “It’s a way of bonding deeply without personal sharing.”

Jon, a longtime local of Polk County, who grew up in Green Creek, soon shared his favorite sledding spot with Briana. As they slid down snowy hills together, their laughter rang throughout the clear evening air, and both of them realized that they felt more than simple friendship for each other.

“We went to see a marriage counselor the first month we dated, to clarify our goals. We decided that talking through things before they come up makes it easier when you need those communication skills,” Cavin said.

McCallum added, “We have learned from lived experience, and we knew how serious we were going to be. We wanted to see where our morals and ideals conformed and where we disagreed, so we could make sure we felt willing to work through that.”