Columbus Lion Garland Goodwin, registered pianotechnician, has made it his business to care for the pianos at the 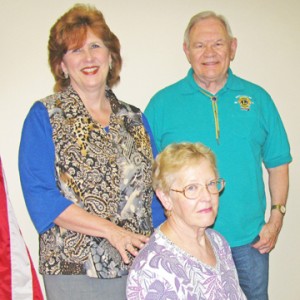 Western Carolina Lions’ Marjorie McCune Memorial Center in Blacksburg, N.C. The center provides assisted living for some 60 residents, only some of whom are Lions.

The first piano Lion Goodwin found there was a worn out spinet with more than a dozen strings broken out of the treble section, so he set about replacing it while simply tuning another spinet in somewhat better condition in the chapel.

He put the word out among his colleagues in the Piano Technicians Guild, and friend Harvey Miller offered his Baldwin vertical piano, since he had recently acquired a fine grand piano. Another Guild friend, Shane Owenby, delivered the Baldwin to the Sun Room at McCune and picked up the derelict there, all for free.

Priscilla Eichelberger recently closed her mountaintop home here and offered her Yamaha to Lion Garland for a “good home.” He suggested the Chapel at McCune, and she was delighted. Again, Owenby sent a crew to take the Yamaha to his shop in Weaverville, N.C. for evaluation. He advised that several cords on the hammer flanges were broken and that replacement of all of them would be better than doing them piecemeal as they continued to break.

A total of 88 new flanges were duly ordered, paid for by the McCune Center, and installed by Lion Goodwin. Shane’s crew delivered the piano to McCune Chapel and picked up the tired spinet. Lion Goodwin finished going over the piano and then tuned it so it would be ready for Sunday services.

The spinet piano will not be going to the dump, but rather to the home of a young piano student whose family cannot afford to buy a piano.