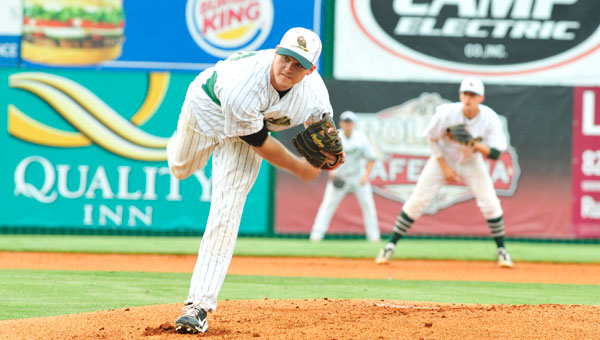 Lucas Cash pitches for the Forest City Owls in a game against Catawba
Valley. (photo by Mark Schmerling)

Baseball dreams die slowly, if at all. 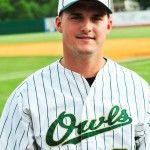 For former Polk County High School standout pitcher Lucas Cash, the dream of playing professional ball, possibly Major League, is very much alive. Cash, who pitches for Virginia Military Institute on a baseball scholarship, recently signed to play this summer for the Forest City Owls in the Coastal Plain League, a circuit designed to give gifted college players a better chance to catch the eyes of bigleague scouts.

“It gives scouts a good idea if we can handle the everyday life (of professional baseball),” said Cash, who graduated from PCHS in 2011. In his case, scouts should be making plenty of notes.

As of last week, all three of his starts have been pretty good.

“I’m one pitch away from having a great game,” Cash said.

This past Monday, Cash did enjoy a great game, yielding just two runs and five hits in seven innings, as Forest City topped visiting Catawba Valley in exhibition play at McNair Field. Cash threw only 98 pitches to record those 21 outs, before Owls’ head coach David Tufo sent in a reliever. In its 17th season, the Coastal Plain League features 14 teams playing in North and South Carolina and Virginia.

Another Polk pitching standout, Danny Sraga, who graduated a year ahead of Cash, is now playing summer ball for Gastonia in the CPL. More than 1,000 CPL players have been drafted into professional ball. Of those, 57 have played in the Major Leagues, including 2011 American League MVP and Cy Young winner Justin Verlander.

Cash is on the mend from Tommy John surgery performed on his right arm during his senior year of high school. But for that detour, his high school career could have been spectacular. He pitched some varsity ball during his freshman year at Polk, but with starters like Sraga, most of Cash’s play was for junior varsity. During his sophomore and junior years, Cash was a regular starter for the Wolverines.

Before the surgery, Cash’s fastball clocked in at 89-91 mph. Though he can still get the ball to the plate quickly, “I’m waiting for the day to come when I start throwing hard again.”

In the meantime, he’s working on a slider to mix in with curves and change-ups. When Cash’s hummer returns, those other offerings will be even more effective. Wolverines’ varsity coach Ty Stott had nothing but praise for his former player.

“He (Cash) was player of the year in the conference. We won back-to-back conference championships with him as a sophomore and junior,” Stott said.

In Cash’s freshman year, he propelled the JV team to a 17-1 record. Not surprisingly, he didn’t throw quite as hard then. His fastball at the time was about 84 mph, remembered Stott.

Stott emphasized, “He could have been a four-year starter with most teams. If I had a freshmen Lucas Cash, he’d be a starter for us now.”

“He had a big presence on the mound.” Cash’s fans hope professional scouts notice that presence, too. For now, his mother, Lisa Cash, notes, “He’s having a lot of fun.”