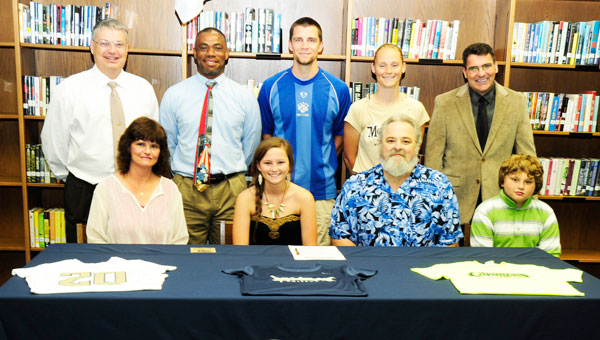 Jordan Geer’s graduation from Polk County High School last week is a loss to the Wolverines’ soccer team, but a win for Montreat College, where she’ll be headed on a combination athletic/academic scholarship this fall.

Last Friday, Jordan, the daughter of Bart and Stacie Geer, made it official, when she signed with Montreat, a Christian liberal arts school near Black Mountain.

Despite Geer missing nearly half of the recent season to an injury, the Wolverines made it to the third round of playoff action, before bowing to the eventual state runner-up.

“You’d always like to have more players like her,” Charles said. “She’s not the biggest girl, but she’s tough. She’s almost too tough and too fearless at times. “

Charles continued his praise of his now former player.

“She’s always worked really hard,” he said of Geer. “She’s been easy to coach.  She’ll take it (advice), process it and move on.”

Montreat is a smaller school, with a soccer program women’s head coach Courtney Nash has recently turned around. Based on that, Charles feels that even as a freshman, Geer might see some playing time.

“I think she has a little time to compete for playing time,” he said.

And, he expects Geer to do well.

“She’s smart, and she’s not going to back down from anybody,” he added.

How does Geer feel about advancing to college?

“I’m psyched about it, and can’t wait to start there,” she said last Friday.

She has the same enthusiasm for playing collegiate soccer. “I’m really excited about it,” she said, noting that she recently got to stay in the dorms at Montreat, and enjoyed soccer practice with some of the players there.

Geer plans to major in psychology, and will enroll in a criminal justice program if that option exists. She’d like to be a criminal profiler.