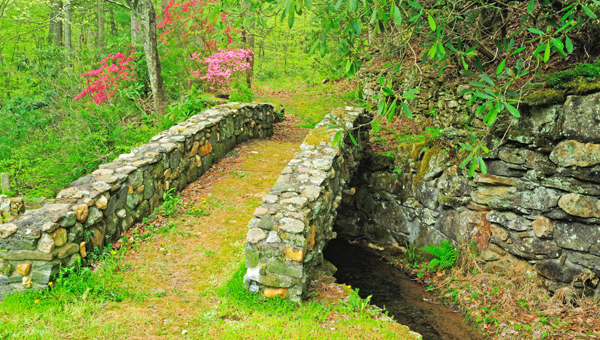 Open to all Saluda Postal District residents and those who have used the facility in the past, the event will run from 11 a.m. to 4 p.m., with a free barbecue lunch and drinks provided, and new and rebuilt facilities at the park for swimming. The 21-acre site also features wooded hiking trails that will be open.

Parking at the site is limited, so SCLT will operate two shuttle vans, which will leave from the Saluda Fire Department on Greenville Street at 11 a.m., and go to and from the park as needed.

Among the improvements at Twin Lakes are an enlarged beach, better drainage from the upper lake to the lower, and safety additions to the sliding board at the edge of the upper lake. The steep slide drops travelers into shallow water.

Outgoing SCLT President Betsy Burdett noted the importance of the sliding board for children who are uncomfortable in the water.

“Kids who are afraid of water will lose their fear,” noted Burdett. “The thrill of the sliding board is greater than their fear of water. They get water in their face (when they land in the shallow water).”

SCLT members, aided by private contractors, have worked to make Twin Lakes safe and enjoyable for visitors, while enhancing the facility and providing nearby recreation. An overflow pipe was recently placed in the upper lake (feeding the lower lake), to regulate water level in the upper impoundment. Docks have also been improved.