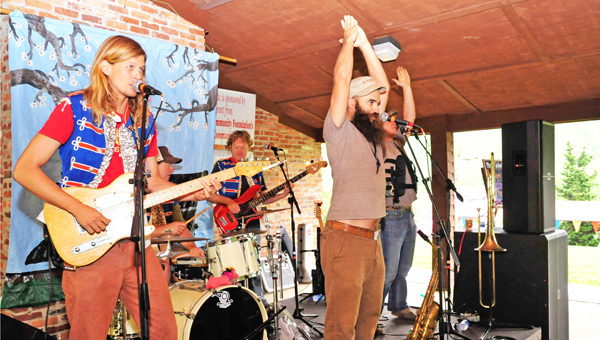 A large crowd that filed into the booths of more than 70 vendors at Saluda’s Arts Festival Saturday, despite a soggy forecast, was proof enough that the 10th annual festival truly had “something for everyone.”

Cathy Jackson, vice-president of promotions for the Saluda Businss Association (SBA) said, “We always have perfect weather (for the festival), rain or shine.”

This year, though some vendors were unable to set up because of early-morning rain showers, those 72 who did, enjoyed cloudy, but mild, conditions, punctuated by occasional rain and a stream of visitors.

This year’s event, driven by the SBA, and funded by a long list of sponsors, was dedicated to the memory of artist Johnny Waddill.

Waddill, who passed away March 1, 2013, had once permitted the use of his painting of a summer festival in Saluda.

Since 2006, that image has been used as the branding of the Saluda Arts Festival. Among other works, the Saluda Center, held a collection of Waddill’s art on Saturday.

Birdhouses made from reclaimed barn metal and cedar, hand-made pottery and greeting cards, paintings, photographs and booths filled with individually-crafted clothing items and wood work, were among the 70-plus displays attracting local residents and visitors.

“I’ve done art all my life,” Merritt explained, but he also noted that his present business was in part, a product of increasingly lean times as a carpenter. “When the jobs dried up, I had to do something.”