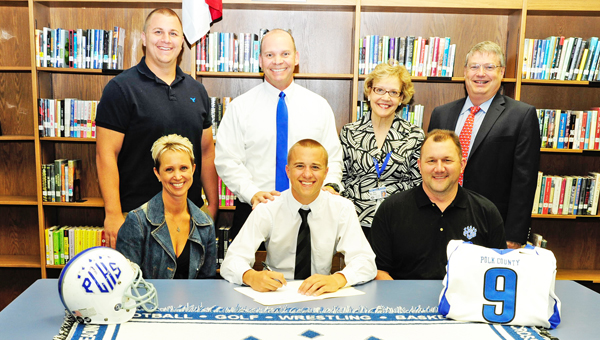 Philpott, a three-sport (football, basketball and baseball) All-Conference athlete, who was last year’s Conference Offensive Player in football, will show his talents two hours away, after receiving a football scholarship with the Bears.

“That speaks to his athleticism,” said Ollis. “There’s a guy who’s been helping our school in three different sports.”

“Alec did a lot of things behind the scenes,” recalled Ollis, including spending three hours at a time on post-football-game Saturdays, studying game films to be a better player.

Ollis praised Philpot’s “great work ethic,” which will be helpful given the high academic standards held at Lenoir-Rhyne. Ollis also recognized some of Philpott’s other contributions, one of which was as student organizer for the Special Olympics, where “he (Philpott) did all the work.”