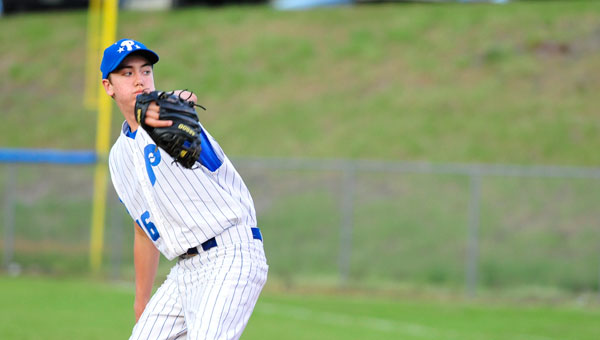 This Friday would be a great time for Polk County High School varsity baseball players to show their real hitting strength, as the Wolverines begin playoff action at home against Bunker Hill. First pitch is set for 7 p.m.

Ty Stott has coached Polk for 18 years. In that time, “we’ve always had some very good players,” Stott recalled.

Since 2000, the Wolverines have captured five conference championships, and from 2007 through 2010, advanced to at least the third round of the playoffs.

On occasion, Polk hitters have exploded with hard and timely hits, but Stott is concerned that in three of the past four games, that hasn’t happened.

“We just have to get some momentum (going into the playoffs),” he said. Recent soggy weather has also upset the hitters’ timing. “With this weather, it’s hard to get into a routine.”

One definite plus for the playoff opener is this: Until last year, the Wolverines were 14-0 in home playoff games. In last year’s opener, a star pitcher and a star hitter were both out of the lineup with recent injuries.

“In baseball,” observed Stott, “home field advantage is bigger than in any other sport. Among other factors, “We get to bat last.” Another factor is fan support. The Wolverines have that, and Stott expects a big crowd to turn out on Friday.

“We just couldn’t get the timely hits, and they (Henderson) made all the plays,” said Stott.

Stott said his players excel at taking advantage of any of their opponents’ mistakes, but added that Henderson made none.

Starter Daniel Painter got scant support, as Polk fell to 12-8 overall, and 10-2 in conference action.

Polk’s make-up game against Mitchell, was to be played yesterday at Polk (switched from Mitchell).

The playoffs are single-elimination through the first four rounds, so teams must play well to advance.

“Fourth round is the furthest we’ve ever been,” said Stott. “That was in Single A.” With its current Double A status, Polk faces a greater challenge in the post season. “Double A is very difficult to get to the third round,” said Stott. “Our pitching is very strong. When we hit, it makes everything easier,” a thought echoed up and down every level of baseball.

A further reason for optimism, Stott noted, is that many excellent teams have faced the same schedule interruptions from rainy weather, and all will be trying to work their way back to top form. “I think we’re capable of winning a couple of (playoff) games,” said Stott.

Bunker Hill is the third-seed in its conference, while Polk is first in the Western Highlands Conference.

“What we did (in) the first 20 games, we need to get that back,” said Stott. “We’re going to have to be scrappy and capitalize on the other teams’ mistakes.”