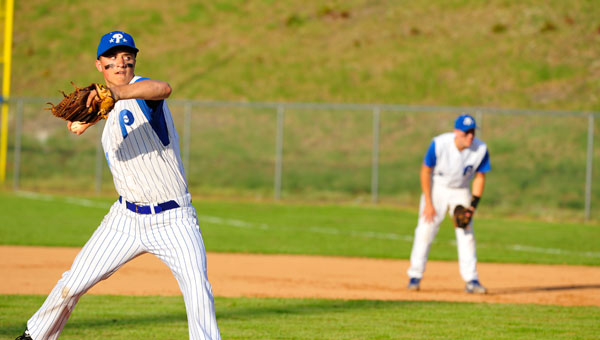 Coach Ty Stott was especially pleased with “the timely hitting,” which has sometimes eluded his batters.

Polk lifted its overall mark 12-7 overall, and its conference record to 10-1. Starting pitcher Alec Philpott was mostly dominant, and also lined two hits in the win.

Polk took a 1-0 lead in the home first. With one down, Philpott blasted a single off the first-baseman.  Dylan Turner singled to center, bring up third baseman Wes Brady, who singled home Philpott.

In the home second, Polk opened it up. Trevor Arrowood led off with a line single to right center, but was forced at second on Mark Mazilli’s fielder’s choice grounder. Mazilli strayed just a bit too far from first, and was picked off . However, J.C. Suddeth and Jordan Brown both walked. Philpott laced a fastball into deep left center for a two-run double, and scored on Turner’s hard single to left, making it 4-0.

Philpott mowed down the visitors one-two-three in both the third and fourth. In the home fourth, the Wolverines made it 5-0. With two down, Brown was hit by a pitch, and Philpott walked. Turner followed with his second single, a bullet to left that scored Brown.

Owen got on the board in the top of the fifth, but did no more. Philpott hit the leadoff hitter on the arm. The next batter rifled a ball just inside third, but Brady made a sensational diving stop. That was all he could do, as his throw to first, from a reclining position, was late.  A fielder’s choice groundout at second put runners at first and third, setting up Owen’s only run, on a sacrifice fly.

After that, it was all Wolverines. In the home fifth, leadoff hitter Bryce Martin greeted Owen’s reliever with a hard single to right. One out later, Arrowood’s second single made it first and third. Mazilli was hit by a pitch to load the bases. Suddeth then patiently took a walk to score run number six, and Brown’s sacrifice fly to right made it 7-1.

In Owen’s sixth, a single and a hit batsman brought Daniel Painter in to relieve for Philpott, with one out. A fly out (with the runner advancing harmlessly from second to third) and a strikeout on a held foul tip got Polk out of the inning.

Polk struck again in the home sixth. With one down, Brady belted one high and deep to left center. A few hours earlier with sunshine and lighter air, it probably would have left the park, but it banged off the fence. Brady, who might have expected those extra few feet, coasted into second with a double. Nothing was lost, as Martin’s sacrifice fly put Brady on third. Pinch-hitter Konnner Scrugs lined a single to left, scoring Brady, to make it 8-1. Painter reached base on a bad-hop grounder past the shortstop, to put runners on first and second. Tyler Tomberlin pinch ran for Painter. Mazilli’s single drove home Scruggs, and Tomberlin also scored, after a bobble by Owen.

That ended the scoring at 10-1, as Turner closed it out for Polk in the top of the seventh.

Referring to Brady’s stellar play at third, Stott noted, “He’s been solid all year. Our defense has been solid all year. So has the pitching. We hadn’t been scoring,” added Stott. “It was good to get some runs on the board, to give the pitching and defense a little rest.” Stott was also pleased with his players’ attitude. “They (Owen) had some opportunities early, but we stopped them. That was huge.”