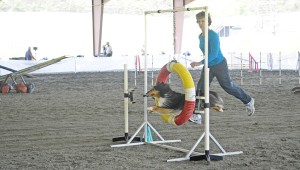 Kris Mayer’s Onyx leaps through a tire at the end of his run Friday afternoon. Onyx is a Shetland Sheepdog. (photo by Samantha Hurst)

Abbot said the competitions are particularly good for high-energy dogs. She said it allows them to release that energy but also learn to be obedient and to think about their actions.

“It’s a flow – like a dance the two of you are doing together,” said Judy Wiltsek of Mill Spring. “It can be pretty addictive.”

The United States Dog Agility Association (USDAA) is the world’s largest independent authority for the sport of dog agility, with more than 25,000 registered competitors and more than 200 different breeds of dogs, including mix breeds. USDAA represents more than 100 affiliated groups throughout the continental United States, Puerto Rico, Canada, Mexico, Bermuda and Japan.

The BRAC’s next event is May 24 – 26 at the Western North Carolina Agricultural Center in Fletcher, N.C. For more information visit the web at www.blueridgeagility.com or call 828-713-3278.

Knox said FENCE would continue to diversify its offerings with an Octoberfest at the end of this year that will feature beer, wine, antiques and a variety of vendors. The facility will also bring new equestrian offerings by hosting two open horse shows with western riding classes, a keuring to evaluate horses for acceptance into an European breeding association known as Friesians, and clinics from Olympic rider and coach George Morris and natural horsemanship clinician Dave Seay.