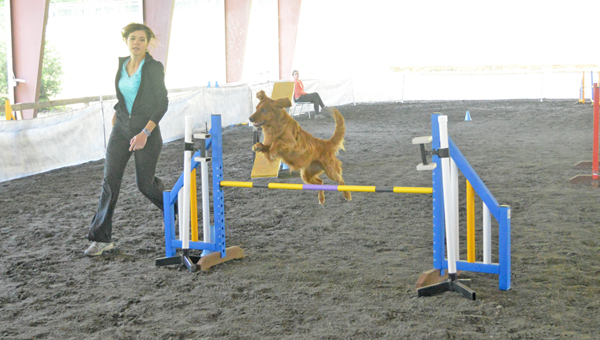 This is the second year in a row the club has chosen FENCE as a site for one of its four yearly trial events.

“We definitely are trying to diversify the groups that use our facility,” said FENCE executive director Carrie Knox. “We want to really be a community resource where folks feel they can come for a variety of things – hiking, nature education, horse shows and other competitions.”

The Blue Ridge Agility Club of Western North Carolina’s agility trials continued April 27-28. Those who participated in the event said the competition is addictive and so is the camaraderie.

“I thought it looked like fun. I’ve always had dogs around and I realized this was a fun and different way to connect with my dogs,” Abbot said.

The agility trial requires a handler to lead their dog around, over and through a series of obstacles. This means balancing across bridges, running through tunnels, leaping through tires and hurdling fences. Dogs and their handlers are divided into two rings – one for beginners and intermediate level competitors and another for master level dogs and handlers. The dogs are timed and graded on how well they complete each task, including their ability to make certain qualifying points on the obstacles.

Exhibitors come from across the eastern United States to compete.