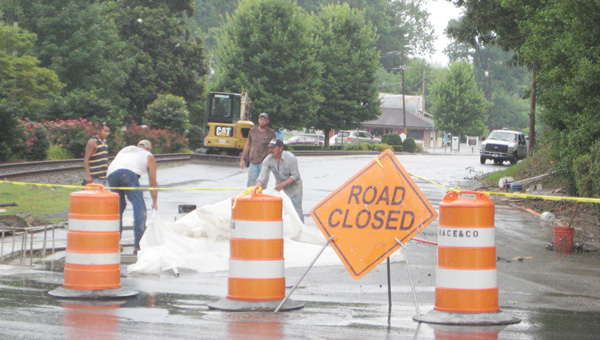 McCown Street is closed to traffic while work is under way to add angled parking spaces and make the road one way heading into Pacolet Street. Work is expected to be complete by Friday, July 13. (photo by Samantha Hurst)

Downtown Tryon’s McCown Street will soon be made one-way and have added parking and pedestrian areas.
Construction along McCown Street began Monday, July 2, and the street is closed during construction.
Part of downtown’s Tryon’s Streetscape project, McCown Street improvements will include approximately 20 angled parking spaces along the new one-way northbound street.
The new parking spaces will be located on the railroad side of McCown Street.
Once construction is complete, vehicles will be able to access Pacolet Street from South Trade Street near Sidestreet Pizza. Coming from Pacolet Street, vehicles will no longer be able to turn right on McCown Street to access South Trade Street. Instead, they will cross the railroad tracks and turn right onto Trade Street.
McCown Street improvements also include two 40-foot teardrop planters at the ends of the street. The town also has plans to place retractable traffic bollards so the street can be closed easily during town festivals and other events, such as the Thursday farmers market. The farmers market will be held in the Depot parking lot today, Thursday, July 5, and next Thursday, July 12. The McCown Street construction is scheduled to be complete by next Friday, July 13, said project manager Crys Armbrust.
Interim Tryon Town Manager Joey Davis said the town has asked the N.C. Department of Transportation (DOT) to allow left turns onto Pacolet Street from Trade Street, which are currently not allowed. DOT is in charge of changing traffic patterns because Trade Street is a state-owned road.
Davis said it is the town’s hope that the state will change the traffic light to add a left turn signal at the intersection.