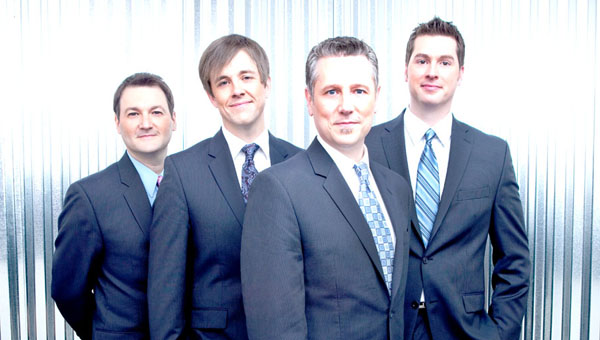 Landrum First Baptist Church will host Brian Free and Assurance in a love offering concert on Friday, April 20 at 7 p.m. The group presented a well-received performance at the church last summer.
Brian Free is one of the most recognizable southern gospel tenors of this generation. Since 1982, he has been at the forefront of southern gospel music since first joining Gold City Quartet, then moving on to form his own group.
Brian Free and Assurance are currently nominated for eight Singing News Fan Awards.  Collectively, the group is nominated for favorite artist, traditional quartet and song of the year for “I Believe.” Individually, Brian Free is nominated for favorite male singer and favorite tenor. Bill Shivers is nominated for favorite lead singer, Derrick Selph for favorite baritone singer and Jeremy Lile as favorite bass singer.
Free said southern gospel music has always been his first love, and fans have responded to his music by honoring him and the group with awards such as favorite male singer, favorite tenor (record of eight times), favorite young artist (twice), favorite Horizon group, favorite album (“4 God So Loved”). Most recently, the group’s song “Long as I Got King Jesus” received a Dove Award for Southern Gospel Recorded Song.
Brian Free and Assurance have appeared on “Prime Time Country” (TNN), “Hee Haw” (CBS), “The Today Show” (NBC) and 27 of the “Gaither Video” series. Free has also hosted the hit show “Four” on GMC.
Organizers said although the group’s members come from different backgrounds, they all agree on one thing, and that is to use their God-given abilities to take the message of Jesus Christ to everyone they can.
– article submitted
by Stacie Ridings