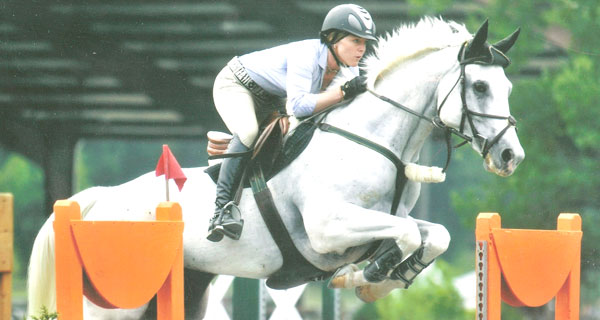 Ashley Conkle was brought to this area when she was offered a lifetime opportunity to ride and train with Lincoln Russell.

This opportunity arose when Russell suffered an injury in February 2011 that prevented him from riding and competing for a long period of time. Conkle was honored when Sally Frick and Russell approached her to help them and Motlow Creek during this time. With the support of many, especially Suzanne Russell, they were able to come together to keep the horses fit and competing.

Russell is a third generation professional horseman and trainer who has competed both nationally and internationally, and Conkle said she couldn’t have asked for a better mentor and teacher.

“I have been able to raise the level of my riding skills thanks to Lincoln’s vast knowledge and experience that he has shared with me in horsemanship,” said Conkle.

Conkle’s role at the Motlow Equestrian Center is always evolving depending on what is needed to achieve the highest quality of performance from the horses and riders.

Conkle’s main role and responsibilities are to the competition show horses for shows in the hunter/jumper world.

“I am fortunate enough to be entrusted with the care and exercising of these amazing athletes under the guidance of Russell. It gives me great joy to see horses enter the ring, and not only look and perform to the best of their ability, but to see them enjoying what they do,” she said. “We have had a successful show season in 2011, and we look forward to a strong season in 2012.”

Conkle rides five or six horses a day, depending on what the horse’s program and needs are.

“I personally own and ride a 10-year-old gray gelding Irish sport horse named Cruising Blue. He is out of a World Cup stallion, Cruising, and his dam was a silver medalist at the 1996 Olympic Games in Atlanta,” Conkle said.

Conkle has shown Riley for the past two years. While competing in the low-level jumpers divisions, Conkle said she saw immense potential in him.

“This past summer has been a learning curve for both of us. We set goals in the Amateur Owner Jumper divisions, and successfully won the series at the Tryon Riding and Hunt Club shows here,” Conkle said. “We were division champion and won our classes, too. I also had the opportunity to compete on Motlow’s Pangloss, a Westphalian stallion out of Potsdam/Angelique owned by Sally Frick.  I rode in my first Puissance class with him and placed third, clearing a solid wall set at 4’9”. I am always growing and striving to improve my skills.”

Conkle looks forward to turning professional in the future. She said she is ever grateful for being part of the Motlow Team, and she said she realizes it’s a family that has been given to her. Coming from Orlando, Fla. to a smaller town has been refreshing for Conkle.

“It’s homier here and the horse world equestrians are strongly integrated. This is something I’m experiencing for the first time, and it has been an ideal lifestyle for me. I cannot begin to express my gratitude for the support and confidence that Lincoln and Suzanne Russell, Sally Frick and the entire Motlow team family have extended to me,” she said.

A personal moment from Trainer’s Challenge