Stockdale serves as junior class president at Polk County High School. He has been a governor’s page and is vice president of the Green Team, a school club that raises environmental awareness to help make the school more energy efficient.
Stockdale also founded the A+ Program, a tutorial program that allows high school students to serve as academic role models for low-performing middle school students.
“To our knowledge, no one from Polk County has ever been selected to participate in the program,” said Lee Stockdale, Ben’s father. “I would like to say that Ben was solely responsible for every aspect of his application. He worked on the application for a month and all Gail and I knew was, ‘Whew, Ben is sure working hard on that thing.’”
Stockdale had to produce a video as part of his application for the program. In the video, he talks about his background growing up in a military family, his activities in school and his interest in politics and community improvement. The video can be seen on www.youTube.com.
According to the USSYP administrators, students accepted to the program, in addition to possessing outstanding leadership abilities and a strong commitment to volunteer work, also  rank academically in the top one percent of their states among high school juniors and seniors.
The USSYP was created by Senate Resolution 324 in 1962 and has been sponsored by the Senate and fully funded by The Hearst Foundations since inception.
Each year this merit-based program brings 104 of the most outstanding high school students — two from each state, the District of Columbia and the Department of Defense Education Activity — to Washington, D.C. for an intensive week-long study of the federal government and the people who lead it. The overall mission of the program is to help instill within each class of USSYP student delegates more profound knowledge of the American political process and a lifelong commitment to public service.
While in Washington Stockdale and the other student delegates will attend meetings and briefings with senators and Congressional staff, the president, a justice of the Supreme Court, leaders of cabinet agencies, an ambassador to the United States and top members of the national media.
The students will also tour many of the national monuments and several museums and they will stay at the historic Mayflower Hotel in downtown Washington, D.C.
In addition to the program week, the Hearst Foundations provide each of the 104 student delegates with a $5,000 undergraduate college scholarship with encouragement to continue coursework in government, history and public affairs.
Program administrators emphasize that transportation and all expenses are also provided by The Hearst Foundations; no government funds are utilized.
The chief educational officer in each state selects the delegates after nomination by teachers and principals. This year’s delegates were designated by Dr. June St. Clair Atkinson, Superintendent of Public Instruction.
“I’m excited about the things I’ve done,” said Stockdale in his video, “and if given a chance at the brighter future, who knows what my life may hold.” 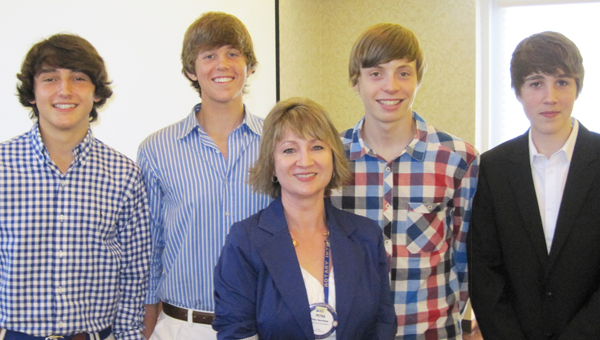 Ben Stockdale (second from left) and Will Trakas (left) of Polk County High School with Niklas Burkhart and David Jenet of Pirmasens, Germany. The students are participants in a Rotary Club of Tryon exhchange program. They are shown here with Petra Harrelson, co-chair of the youth exchange program. (photo submitted by Bill Hillhouse)