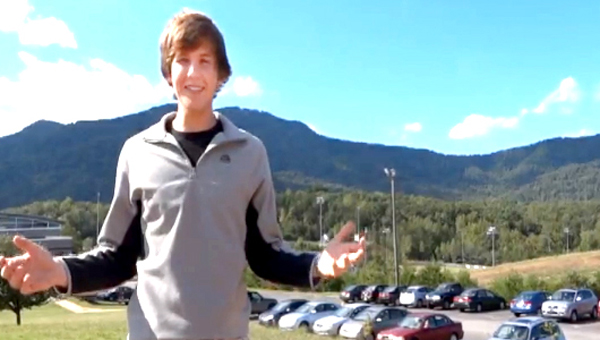 Ben Stockdale stands outside Polk County High School in a still from the opening of the video he created as part of his application for the U.S. Senate Youth Program.

Polk High junior leaves for Washington, D.C. in March
Polk County High School junior Ben Stockdale got some exciting news recently.
N.C. Senators Richard Burr and Kay Hagan announced that Stockdale, who lives in Tryon, is one of two N.C. students selected as delegates to the 50th Anniversary United States Senate Youth Program (USSYP), which will be held March 3–10 in Washington, D.C.
On Wednesday, Feb. 8, Stockdale received his final packet from the program administrators. It contained his plane ticket, instructions and his official badge that says, “Benjamin Stockdale. North Carolina.”
“I’m really excited!” Stockdale said.
He said he can’t wait to get to know the other kids in the program, from all over the country.