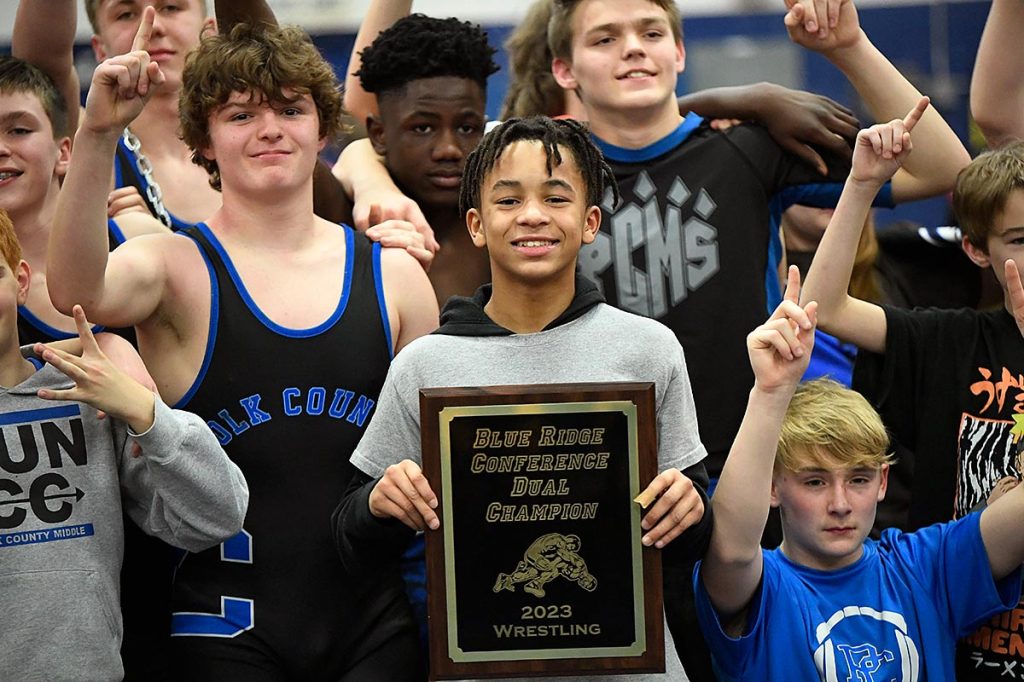 Dare to dream such? Jerry Cox did, often, in the years since taking over Polk County Middle’s wrestling program. Through workouts and practices, wins and losses, the vision remained, sometimes seemingly unreachable but always there.

Go out and actually achieve it? No longer easier said than done.

Polk Middle capped an undefeated season Tuesday with a 60-38 victory over Bethel Middle in the Blue Ridge Conference Championship match at Bethel, completing a 16-0 campaign and winning the first conference title in the sport in school history.

And a few notes for the history books:

“I’ve envisioned this a long time and a lot,” Cox said. “Just to see it finally come true is awesome. Obviously, no other team in school history has been to 16-0. There have been a lot of 15-0s, but to get that last win and get to 16 is pretty nice.”

As befitting a conference final, Bethel provided Polk its toughest challenge of the season. Lower weights represented the Blue Demons’ strength, and that group helped keep the final close early.

Bethel, in fact, led 21-18 after the eighth match of the evening, the teams each winning four of those. Polk’s early victories included Gavin Waldbillig’s 13-6 decision at 85 pounds, a Rivera pin with 22 seconds left in his match at 100 pounds, Wolfe’s hard-fought 6-1 decision at 113 and Evan McCraw’s second-period pin at 128.

But the proverbial tide swapped course at 140 pounds, where Polk’s Chester Wilson delivered a convincing first-period victory by pin. Simon Moore and McCraw followed with wins by forfeit to give Polk a 36-21 advantage, swelling the momentum. Then Blackwell notched a win by fall, Huff followed with a first-period pin and two more forfeits secured the title.

“Kids that don’t normally lose lost, so we had to have other kids step up and some other kids fill some spots up top for forfeits where we could get six points,” Cox said. “We knew if we could get through those lightweights and break even in about five, we could really expose some of their weaknesses.”

Both finalists each easily won their semifinal matches that opened the day’s schedule. Bethel relied on its lower-weight strength to build a big lead and top Apple Valley 58-39 while Polk Middle won 15 of the first 16 matches en route to a 74-21 victory over Waynesville Middle.

That set the stage for a final with a championship atmosphere – gym lights dimmed, spotlight on the mat, crowd roaring.

And a group of Wolverines emerging with history and a championship plaque firmly in hand.

“We’ve been building this program, and there’s a lot of people to thank,” Cox said. “I’ve got two assistant coaches (Phillip Miller and Mason Jackson) that have high-school level coaching. I’ve got two administrators (Todd Murphy and Adam Dedmon) that let me do a lot of what I want. We’ve got the (Wolverine Wrestling Club) and Russell Wilson and everything there.

“The parents have made it extremely easy. Then the offseason tournaments. We’ve not stopped since two years ago, and to get this gratification, that’s what it’s all about.” 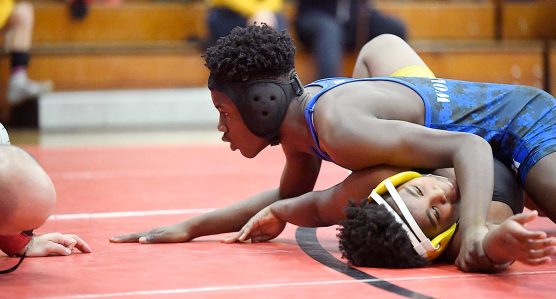