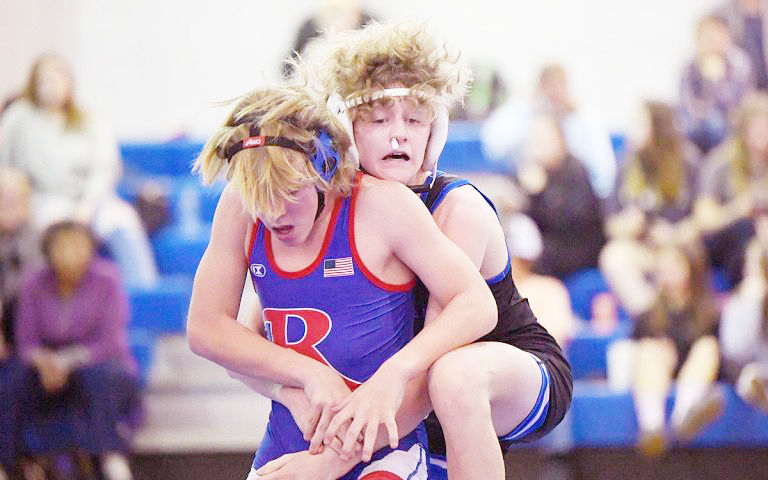 Wolfe still stood as a winner, though – overcoming all obstacles just as Polk County Middle has done all season.

Wolfe made school history and the Wolverine wrestling team did the same, rolling to a 77-9 home victory over Rugby Middle that capped the program’s first undefeated regular season.

Polk extended its school record for victories in a season, improving to 14-0 and completing a run to a second straight Blue Ridge Conference East Division title. Wolfe’s hard-fought 6-1 decision over the Raiders’ Austin Morgan gave him the school record for career victories, breaking the mark previously held by Topher Pearson.

“Congratulations all around, but we’ve still got one more thing to do,” Cox said. “It’s a good feeling. Most wins in a season feels good. We only lost two matches tonight. Fortunately, we had a double forfeit at heavyweight so they didn’t get any points there.

A Rugby Middle program that has long been one of the dominant forces in the East Division figured to offer Polk a challenge on Thursday, and that the Raiders did, with several matches ending in decisions and others often going into the third period before being settled.

But Polk Middle still won the first 13 matches, building a 68-0 lead. Simon Moore’s major decision at 147 pounds secured the match win for the Wolverines, and Styler Blackwell and Zach McCraw followed with pins to keep their undefeated records intact. Sawyer Huff also remained perfect with a win at 197 pounds.

Polk Middle will travel Tuesday to Bethel Middle for the conference dual team tournament. The Wolverines will wrestle West Division runner-up Waynesville Middle, with Bethel meeting Apple Valley in the other semifinal. The two winners will then meet to decide the conference champ.

Those matches are set to begin at 4 p.m.