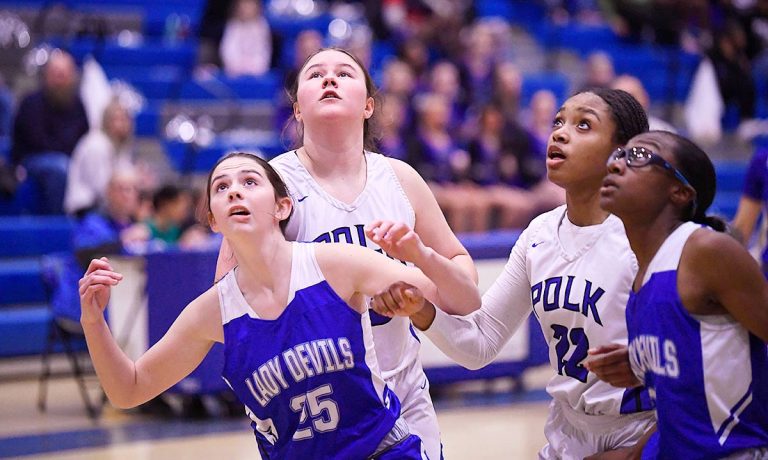 It's all eyes up Tuesday as Polk County's Kylie Lewis, left, and Gavionna Carson wait to see if a free throw is going to fall

Bailey Staton crashed to the floor as her layup sailed high onto the left side of the backboard, then dropped gently through the rim as the referee’s whistle sounded.

Basket, foul, start of a wild few minutes that ultimately led to a Polk County victory.

Staton’s three-point play sparked a nine-point flurry that helped the Wolverines down Brevard 56-43 Tuesday evening in a Mountain Foothills 7 Conference matchup, moving Polk into third place in the league race.

Polk (8-7, 3-2) struggled offensively throughout the first half, but opened the third period with 3-pointers from Staton and Mia Bradley and a long Charley Dusenbury jumper, those baskets seemingly awakening Polk’s offense.

The Wolverines, who trailed by 10 in the first quarter, finally tied the game at 25 on a Kylie Lewis basket and took a 29-27 edge into the final period on two Staton free throws.

The score was tied at 31 when Staton grabbed a rebound on the Blue Devils’ end, dribbled the length of the court and hoisted her layup off the glass while being fouled by Brevard’s Shaniya Cook. It was the fifth foul for Cook, who finished with 10 points, and Staton added the free throw to give Polk a 34-31 lead.

That flurry proved deciding. Brevard (5-11, 3-3) got no closer than seven the rest of the way, and each time the margin dropped there, Polk immediately responded with points, including an 8-2 run over the final three minutes.

“We made the adjustments when we needed to do so,” said Polk County head coach Brandy Alm. “Bailey did a phenomenal job handling the basketball in the second half, and Kylie did an incredible job talking to the girls and communicating.

“During the technicals (Brevard had a second later in the quarter) and all that on the court, she got the girls together and kept them focused. I felt like she was a true leader on and off the court.”

Despite its first-half offensive woes, Polk trailed just 20-15 at the half. Staton drained a 3-pointer at the 5:53 mark of the third quarter, Bradley followed with one at the 5:04 mark and Dusenbury connected from the corner with 4:45 left in the period.

The night marked the first time since before the holiday break that Polk had its complete roster on the floor and healthy, and Alm felt that third-period stretch showed what the Wolverines can do when at full speed.

“It’s so nice to have Mia back. She runs the floor so well and does so many things,” Alm said. “We also did a much better job boxing out and controlling the boards and eliminating their second-chance opportunities.”

Staton had 13 free throws as part of her 25 points, hitting 11 straight at one point. Lewis had 17 points and Bradley added 10.

Jayden Duncan had two points and Dusenbury had two before suffering an injury in the fourth period.

Polk completes the first half of its conference schedule on Thursday, traveling to Chase, before starting the second pass through the league on Friday at Patton.