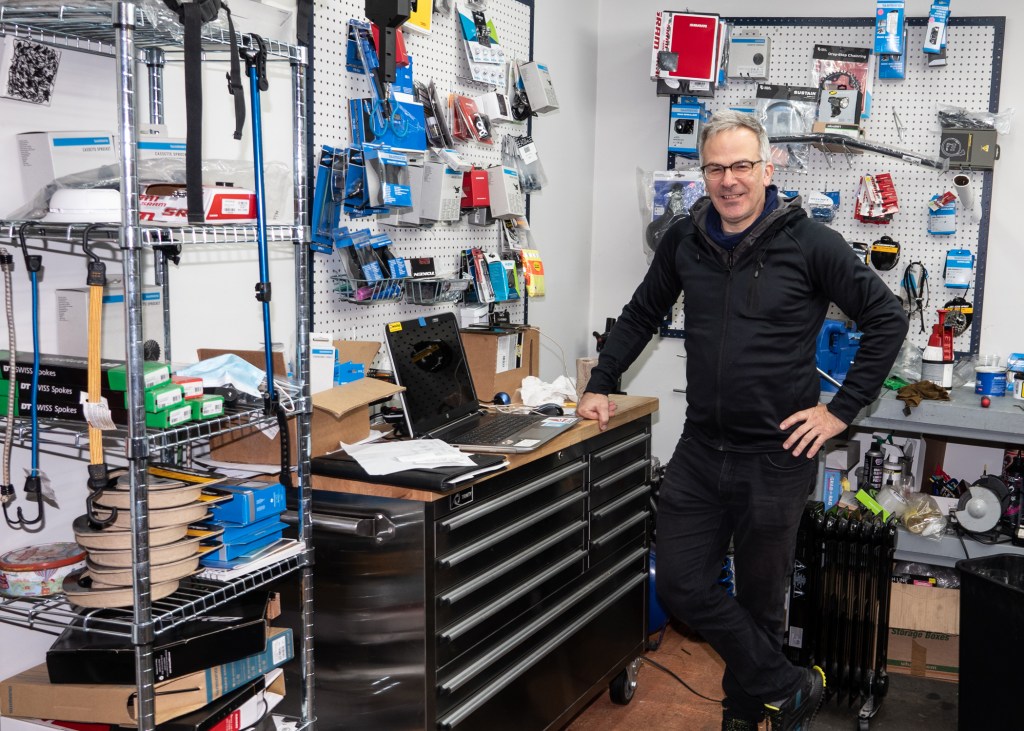 Chris Young in his lair.

Chris Young is a talker. And he’s also someone who will make you feel at home the first time you meet him. He’s a people person and that’s important when you run a business, and especially if the business is a one-man-shop. Chris is the reason people return again and again.

Chris is the owner of Adventure Cycles in Saluda. It’s a full-service bicycle repair shop across from Green River Barbecue. He’s only been in this location for a few months, but it is already proving to be a smart business decision to set up shop where he is. In fact, Chris liked the spot so much that he bought the building. Chris has been repairing bikes in Saluda for the past several years, with most of that time doing business out of the basement of the former Blue Firefly Inn in Saluda.

Chris’s workbench ready for the next project.

Being a bike mechanic was a natural for Chris who says, “I’ve always tinkered with bikes since I was a kid.” I’ve always ridden bikes and taking care of them was an extension of my riding. We moved to Saluda from the Midwest in 1996. When my daughter started school, I had more time to follow my passion of serious bike riding and repair. At first, I worked with bike shops in the Hendersonville area. After fine-tuning my repair skills for several years, I knew it was time to open my own shop.

His shop, Adventure Cycles, is a full-service operation that can handle almost any repair or modification job needed. Some jobs are as simple as replacing a tube and others involve a major rebuild of certain components. He can also assemble bikes someone might have purchased online only for the new owner to discover that it’s not quite as easy as the slick website implied. 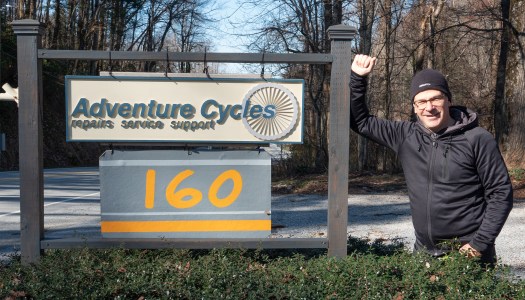 Chris out front of Adventure Cycles.

The shop is stocked with the tools and parts needed to get a stranded biker back on the road. And while Chris loves it when would-be or returning customers call ahead of time, he handles walk-ins (or in this case, push-ins) on a regular basis. It’s obvious to anyone driving a car around the area that Saluda is a mecca of bicycling. And it’s not unusual that a cyclist gets stranded mid-ride. Chris will stop what he’s doing to help a fellow cyclist get back on the road. He’ll also let them know if their bike has something seriously in need of repair that would (or should) keep them from heading down the grade at 43 miles per hour. 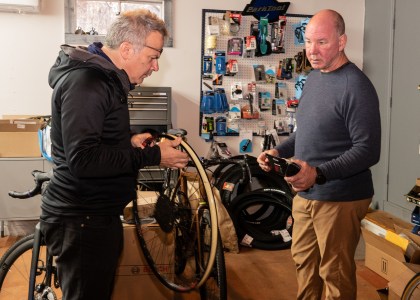 One thing Chris won’t do is a hard sell on his customers. He knows this might be counterproductive to building business, but he feels the opposite. It’s in his character. He wants customers to get what they need and to feel good about it. In the end, everyone wins.

Adventure Cycles is also stocked with a full array of supplies including tires, tubes, tools, helmets, lights, energy bars, and even maps of area biking possibilities. And you’ve come to the right place if you want a first-hand recommendation of area biking routes. Chris has ridden them all.

What you won’t find in the shop are new bikes for sale. Chris says this might happen at some point, but for now, he’s happy to provide his services to cyclists no matter where they bought their bike. Biking seems to be as popular as ever, especially with adults who find it as a means to leave their usual business worries at the office. He’s not so sure if bikes are as popular as a kid’s gift as they were when he was growing up. There’s a lot of competition with e-scooters, e-skateboards, and hoverboards. And of course, e-bikes are rapidly gaining in popularity. But there’s something to be said for getting on a traditional pedal-it-yourself bicycle that helps you find your inner self. It’s a Zen moment to be out on a trail or a road under your own pedal power. 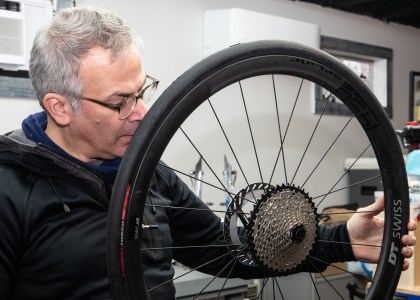 Chris checking over a job.

Riding is a passion for Chris. He can count on being out there at least three times a week. If it’s rideable, he’ll do it. Road biking, mountain biking, and gravel biking give him the option to go anywhere. Hills aren’t an obstacle and riding US 176 (the Saluda Grade) from Tryon uphill to Saluda is something he does on a regular basis.

Chris and his shop could be in an enviable position to benefit from the proposed Saluda Grade Rail Trail. But he doesn’t want folks missing out on great riding while waiting on the new trail to be opened. “Let’s continue cycling in and around Saluda and the whole area on all the trails and routes we already have and on those that are currently being constructed. Get out there and ride.”

Chris recalls one of his most memorable biking experiences. He was training for the annual Assault on Mt. Mitchell, a grueling 102-mile ride from Spartanburg to Mt. Mitchell, the highest peak in the Eastern United States. Most of the ride is uphill once you get to Marion. It’s no easy ride with over 10,000 feet of elevation climb. One year the ride was moved to June and Chris and friends were training in May. He recalls one of those days that May when it started to snow halfway up to Mt. Mitchell. While some were urging the group to turn back, Chris was saying, “No way, we’ve come all this way. I’m going to the top.” Chris and most of the others pushed forward. As they made it to the peak; the sun came out. It was a metaphor for not giving up when things look rough.

Chris Young has a great attitude about life, about business, and about biking. His love for bicycling is sincere and he stands ready to help others feel the joy of being on a bike. 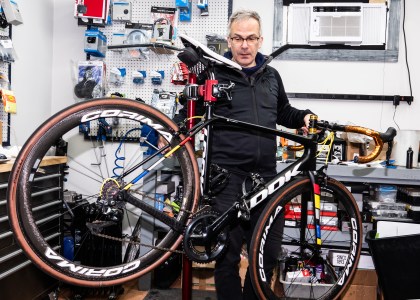 Adventure Cycles is located at 160 West Highway 176 in Saluda. It’s across the street from Green River Barbecue. 828/ 817-1892. Email: chris@bikesaluda.com. The shop is open Tuesday through Saturday during the winter. Call before heading over just to make sure Chris is in his shop and not out riding a bike. 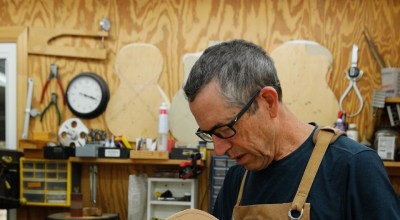