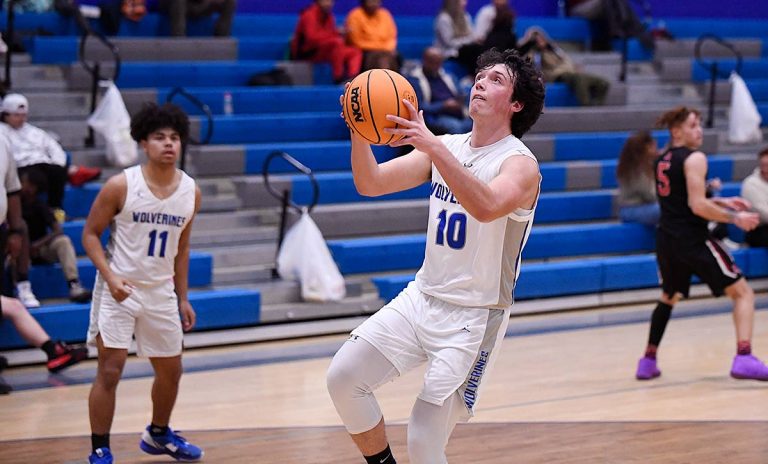 As has often been the case in this most frustrating of seasons for Polk County, the Wolverines had a very good shot Tuesday to score a much-needed win. Unfortunately, as also has too often been the case, Polk just needed a few more good shots to make that victory happen.

Brevard outscored Polk 11-3 over the final five minutes to claim a 57-46 Mountain Foothills 7 Conference victory in a boys basketball matchup at Polk. The Wolverines (4-11, 0-5) kept the game close throughout and trailed 46-43 with 5:21 remaining after a Kris Littlejohn basket.

Polk wouldn’t score again until the 2:35 mark, when Wayne Carson hit a free throw and Littlejohn added a basket moments later to trim the Brevard advantage to 50-46.

But Brevard’s Eli Griffin buried a 3-pointer on the opposite end with 1:43 to go, and Tre Crite followed with a driving layup to boost the Blue Devils’ margin back to nine and end Polk’s hopes for its first league triumph.

“Defensively, I thought we helped a little better,” said Polk County head coach Lemont Jones. “The kids are learning the matchup and doing a better job.

“I’m proud of how our post guys played. That’s the best I’ve seen them play. That’s what posts are supposed to do.”

Polk raced to an 11-3 lead early as Littlejohn and Aaron Jackson each hit 3-pointers. Brevard (12-5, 4-2) rallied to tie the score by the end of the first period, and the teams largely swapped baskets in the second period, with the Devils inching ahead to a 29-23 advantage on a Griffin three just before the buzzer.

A 7-0 spurt late in the third period boosted Brevard to an eight-point edge, but a Mackus Simpson 3-pointer helped the Wolverines close to 42-37 at quarter’s end, setting the stage for the final eight minutes.

Jackson had three while Vincent Twitty and Landen Bradley each added two points and Carson finished with one.

Polk County hits the road Thursday to face Chase and complete the first half of its MF7 schedule. The Wolverines then begin the second half on Friday, traveling to Patton.