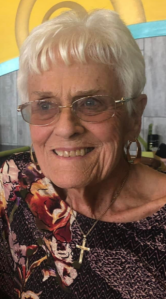 Born in Detroit, Michigan she was the daughter of the late Ralph and Virginia Kolb Dunn.  Janet and William married in 1962 and later started a family.  Janet was very active in her children’s activities including 4H and Cub Scouts. Janet started her career in the Waterford Michigan School District as a special needs school bus driver. She was passionate about her job, ensuring children made it safely to and from school.  In 2001, her and her husband moved to Lake Adger in Mill Spring, NC.  She and her husband started a business, Gaming Tickets, Inc. and were pioneers in the gaming ticketing industry. They became members of Lake Lure Baptist Church in 2007, where Janet served the Church in many capacities including in the kitchen, hospitality, and helped with VBS.

In addition to her parents, she was preceded in death by a son, Jess Adam Ledford; a brother, Timothy Dunn and a son-in-law, Thad McGowen.

A memorial service will follow the visitation starting at 6:30 p.m. officiated by Pastor Anton D. Roos.