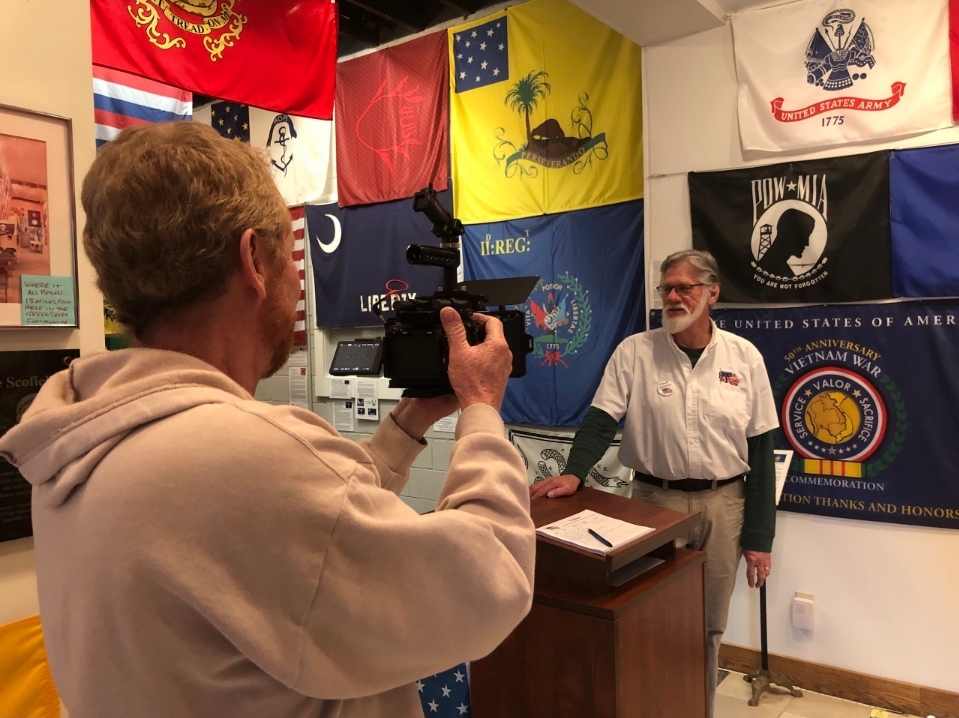 COLUMBUS–Flags get your attention, so it may be no surprise that the House of Flags Museum in Columbus is getting the attention of North Carolina’s statewide public television network, PBS NC. Local producer Clay Johnson and videographer Erik Olsen, who both do contract work for PBS NC, were at the museum Saturday to shoot a segment for the show “North Carolina Weekend.”

“Flags can be very powerful symbols of people, places and causes,” says Johnson.  “We thought people all around the state would be interested in learning about this very interesting and educational museum.”

The museum opened in downtown Columbus in 2011 and displays 300 flags dating back to the Revolutionary War. The museum depends on grants from corporate and nonprofit organizations and private individuals so publicity can help that effort.

“It’s vital to get the word out about the only House of Flags Museum in America,” says museum curator Robert Williamson, “A lot of organizations have called us the best-kept secret in western North Carolina.”

“It takes situations like this where PBS is nice enough to come here and talk about what’s going on so that the House of Flags can get the recognition and it gives people a chance to see something special that the town of Columbus has,” says Columbus mayor Patrick McCool.

North Carolina Weekend is a weekly magazine show that premiers Thursday nights at 9 p.m. on PBS NC and repeats Friday at 5 p.m., Saturday at 10 a.m. and the following Tuesday at 7:30 p.m. The show is also available for on-demand streaming on the North Carolina Weekend website, its YouTube channel and its Facebook page. PBS NC says the House of Flags Museum segment is likely to premier on the show in April.