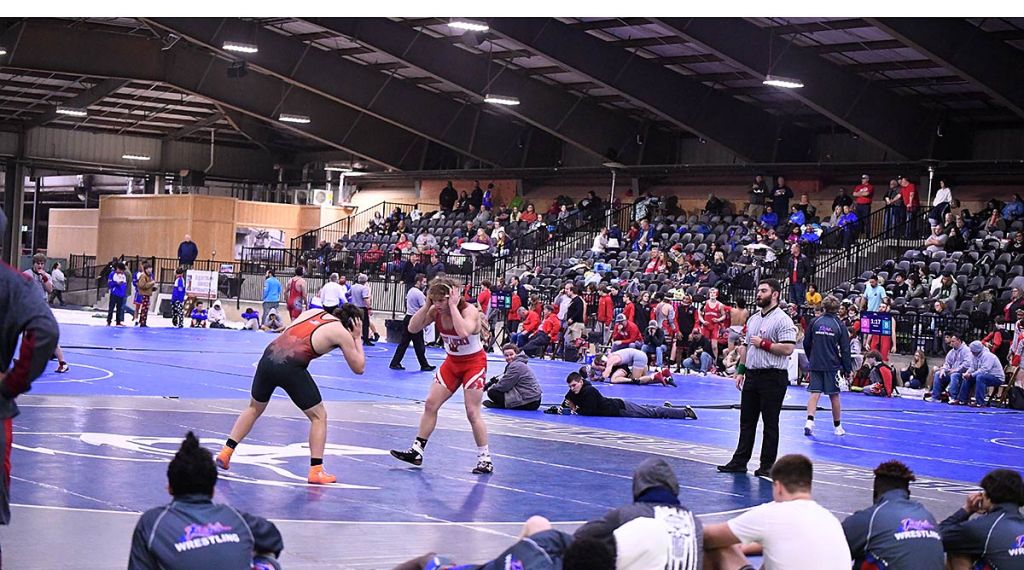 Two women, likely mother and daughter, gathered their armfuls of blankets and food and hopped into the courtesy shuttle Friday afternoon at Tryon International Equestrian Center.

Rolling toward the covered arena where the Carolina Clash High School Duals wrestling tourney awaited, the pair informed the driver they had just arrived from Lincolnton and were there to support West Lincoln.

“We’ve never been here. This is nice.”

Two facts stood obvious during the first of three days of wrestling at TIEC. One, Darrin May, Heath Earley and the group know how to run a large wrestling tournament. Two, TIEC should definitely work to bring this event back next year, consider expanding it and perhaps look at what other high school events might be a good fit.

Hundreds of fans sat in the arena stands, and at times you wouldn’t have thought the event was the first of its type.

“This has exceeded our expectations,” said Columbus’ Shane Blackwell, who helped May set up the event at TIEC.

Were there glitches? Sure. The arena was chilly. Concession stands seemed in short supply. Fans couldn’t always easily see the team scores at each mat. But those were relatively minor flaws, especially for an event making its debut. Competition continues Saturday and Sunday with youth tournaments, the entire three days dubbed the Carolina Winter Nationals.

It’s an event that TIEC should consider helping return next year. The competition featured a number of area schools, but also schools from Knoxville, Upstate South Carolina, the Charlotte area and even coastal North Carolina. That’s hundreds of fans onsite who need to eat, perhaps shop, maybe even decide to stay the night. It also meant introducing TIEC and Polk County to those spectators, and with many schools within an hour’s drive of the venue, those are fans who might opt to return. The indoor arena is largely dormant at this time of year, so an event such as the three-day Carolinas Winter Nationals provides action and attendance.

The event could also become larger. One coach estimated that 25-30 mats could possibly fit into the arena, and if that sounds extreme for any holiday tournament, consider that Friday’s Holy Angels Invitational in Greensboro, an event Polk County had thought about attending prior to the Duals being formed, had athletes from 115 schools. You could easily envision the Clash becoming a two-day, 32-team event, and with girls wrestling becoming an officially sanctioned sport next year, that field would also likely grow.

Wrestling is on the rise in Polk County, and a competition of this magnitude could only help the sport’s growth locally.

And the event could be a model for other high school contests at TIEC. The venue is a natural for cross country, having hosted races earlier this year during its Carolinas Spartan Event weekend. If appropriate flooring could be put in place, you could easily envision a volleyball tournament in the arena.

Wrestling is definitely a good fit.

TIEC is, first and foremost, a world-class equestrian venue, and that purpose will always remain front and center. But as the grounds expand into non-equestrian events – concerts, Spartan Events, holiday lights and ice skating – venturing into high school and youth sports seems a natural progression.