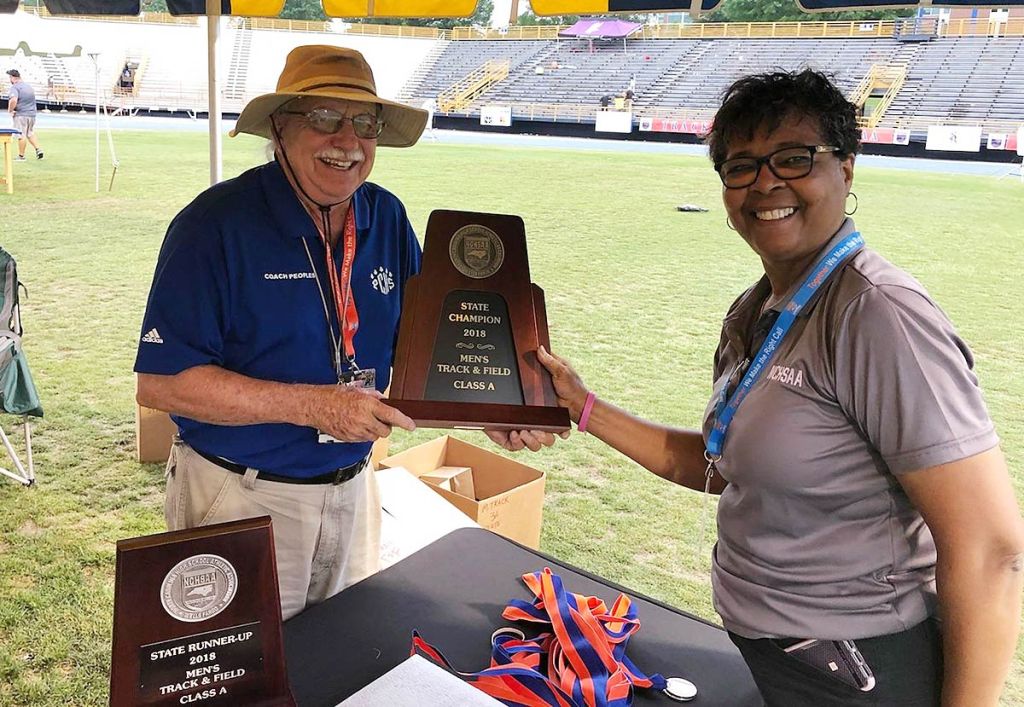 Veteran Polk County coach Alan Peoples has been selected for induction into the North Carolina High School Track and Field and Cross Country Hall of Fame.

Peoples will be part of the Hall’s fourth class of inductees that will be honored during a Jan. 28 ceremony at JDL Fast Track in Winston-Salem, home of the Hall. Peoples will join former Polk County and University of North Carolina standout Karen Godlock and the late Tony Waldrop, who starred at Polk Central and UNC, in the Hall.

“High school track and field has existed in North Carolina for more than 100 years, with the first outdoor state championship held in 1913, the first indoor track meet held in 1922 and the first high school cross country meet held in 1929, and North Carolinas has a strong history of national success, dating to the 1930s when High Point High competed at cross country nationals,” said Brett Honeycutt, founder of the Hall of Fame.

“It’s our goal to honor those who have helped make this sport so great in our state, and these first four classes are a great start at letting people know how much talent has come through North Carolina.”

In his time at Polk County, Peoples has:

“I don’t care who you are, you can’t do this by yourself,” Peoples said. “I’ve had great assistant coaches who give everything every day. I’ve always had that.”

Peoples has held numerous offices for the North Carolina Track and Cross Country Coaches Association, has been involved in Junior Olympics and held coach and official certifications from USA Track & Field.

Also being inducted are coaches E.V. Patterson, the “Father of North Carolina Track & Field” who advocated for the first state meet and came up with rules for the first state meet in 1913, and who coached North Carolina’s first dynasty at now-defunct Friendship High in Burlington, where he led the school to seven straight state titles (1914-1920); Greensboro legend Charlie Brown, who has coached individual national champions, multiple state championship teams, two U.S. national cross country teams and served as meet director for U.S. national meets and two of the state’s longest running high school invitationals; and Roy Cooper (Apex High), the longtime meet director of the prestigious Apex Relays, 20 years as staff at Outdoor Nationals, 30 times as state track or cross country meet director, 17 years as Nike Southeast Cross Country Regional Team manager, as well as coaching Apex to 51 conference championships (cross country and track) and 62 top-10 (and 106 top-20) state finishes between both gender teams for cross country, indoor track and field and outdoor track and field.

A statewide committee of 21 track and field and cross country coaches, officials and media representatives who cover the sport extensively nominated and elected the class.