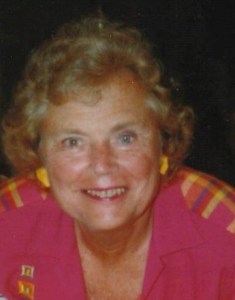 Ann was born to Thelma (Armstrong) and Hearl LaVerne Crowthers in Coshocton, Ohio, on May 12, 1924.  She was an only child.  Valedictorian of her high school in Coshocton, Ann graduated from Syracuse University where she majored in Home Economics, loved being a Kappa Kappa Gamma, and met her husband of 46 years, Frederick (Fred) Parker Harvey. Predeceased by Fred in 1991, she was married to Frank Morgan of Hendersonville, NC, for 10 years.

After college, Ann taught Home Economics at Cato-Meridian School in Cato, NY, where she especially enjoyed teaching teenage boys how to sew.  When Fred returned home after serving in the U.S. Army’s Signal Corps in India during World War II, they were married in Hendriks Chapel on the Syracuse campus in 1946.  After a few years of living in Albany, NY, and Cambridge, MA, they moved to Larchmont, New York, where they raised their three children, Ellen, Frederick C., and John.  There, Ann was a member of and served on boards at Larchmont Avenue Presbyterian Church and the Junior League, sang with and later led the League’s Soundettes, a four-part women’s acapella singing group, doing music therapy.  She was a beloved Girl Scout leader for 10 years, guiding her troop of 20 to reach the highest Girl Scout rank, at the time, the Triple Curved Bar.  She taught sewing in the area’s Adult Ed Program and enjoyed taking French lessons.  Another creative venture she set up was Ann’s Originals, a one-of-a-kind patchwork skirt and alterations business.

Ann’s life continued to be productive and fulfilling after she and Fred moved to Tryon, NC, in 1982.  She couldn’t NOT sing, so she started the music therapy group, The Carolines, which she directed for 23 years.  She was a member of, and treasurer, and served on boards at The Congregational Church, UCC, in Tryon, where she also sang in the choir and played the handbells.  She served on the board of 4H where she taught girls how to sew and implemented the Hostess Helper Program.  As a member of the Foothills Music Club, Ann enjoyed playing piano duets and singing with fellow members.  She sang in The Community Chorus and served on its board.  She played golf at Tryon Country Club with her women friends, and on Sundays with Fred.  For all this and more, she was awarded the Second Wind Hall of Fame.  At Tryon Estates, where she lived for 22 years, Ann led line dancing, accompanied piano for the chorus, was on the board of the Laurel Lake Music Society, and was an excellent bridge player and teacher.  Her unique match-book cover creations are well-known.  Mint-chocolate chip ice cream was her very favorite.

Singing in harmony was a passion as was being with her family.  Ann also loved the beach, sailing, bare-boat chartering as Fred’s 1st mate, travel, good grammar, and the family’s many pets. She loved dancing – the old-fashioned way – cheek-to-cheek.  God, goodness, patience, tenacity, and steadfastness were her guides.

Predeceased by her son, Frederick Crowthers Harvey, in 1989, Fred’s partner, Michael Saksa, in 1991, Ann is survived by her daughter, Ellen Parker Harvey (Warner Zipf) of Columbus, NC, son, Dr. John Berry Harvey (Ann Drew) of Harbinger, NC, three grandchildren (Cal, Drew and Sarah Parker), two greats, three nieces, one nephew, and their extended families.  She would want all to know that she loved her life and felt honored and blessed with much love, support, and many friendships.  Can you hear her saying, “Wow, what a ride!”?  She will be missed.

The family would like to express its heartfelt appreciation for the compassionate care Ann received from the staff at Oak Brook Terrace and Willowbrooke Court at Tryon Estates and from Hospice of The Carolina Foothills.

A service presided over by the Rev. Meghan D. Young, and a reception to celebrate Ann’s life will be held at The Congregational Church, UCC, in Tryon.  The date and time will be announced.

In lieu of flowers, donations in Ann’s memory may be made to The Congregational Church, UCC, in Tryon, 210 Melrose Avenue, Tryon, NC  28722, The Foothills Humane Society, or Foothills Music Club Scholarship Program.