Comedy on the Big Screen at TFAC 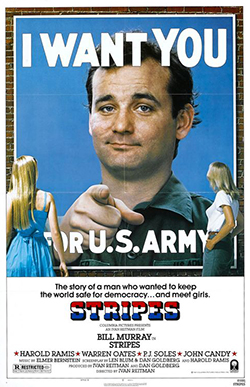 The 1981 army comedy, Stripes, will be screened at Tryon Fine Arts Center on Tuesday, January 10 at 7 p.m.

This comedy, starring Bill Murray, Harold Ramis, John Candy and others, was filmed during the Cold War era and exploits some of the absurdity and ambiguity of those times. The screenplay was tailored for Murray and Ramis, who play buddies who enlisted in the army after finding little success in civilian life, and allowed them considerable input into the storyline.

This intelligent decision was noted by Chicago Sun-Times critic Roger Ebert who praised it as “an anarchic slob movie, a celebration of all that is irreverent, reckless, foolhardy, undisciplined, and occasionally scatological. It’s a lot of fun.”  The stars’ improvisations also created some of the funniest scenes of the movie, which included such activities as mud-wrestling and pancake-making. The director, Ivan Reitman and Marray and Ramis were all still in the early stages of their careers when the film was made.

Detailed negotiation was required with the Department of Defense to make the film conducive to the recruiting needs of the military. This allowed for the use of army equipment and personnel and the Fort Knox shooting location. Murray, who was uncomfortable being shown using guns, was able to justify doing so because his character was only shown shooting in a rescue operation. In celebration of the 40th anniversary of the film’s opening, it was re-opened in theaters for a week in the summer of 2021 with a special introduction by Bill Murray.

To allow time for refreshments and a chance to see some remarkable animations from times gone by, the TFAC box office and bar open 30 minutes before the movie begins. To purchase tickets or for more information about this and other events at TFAC, visit tryonarts.org or call 828-850-8322.