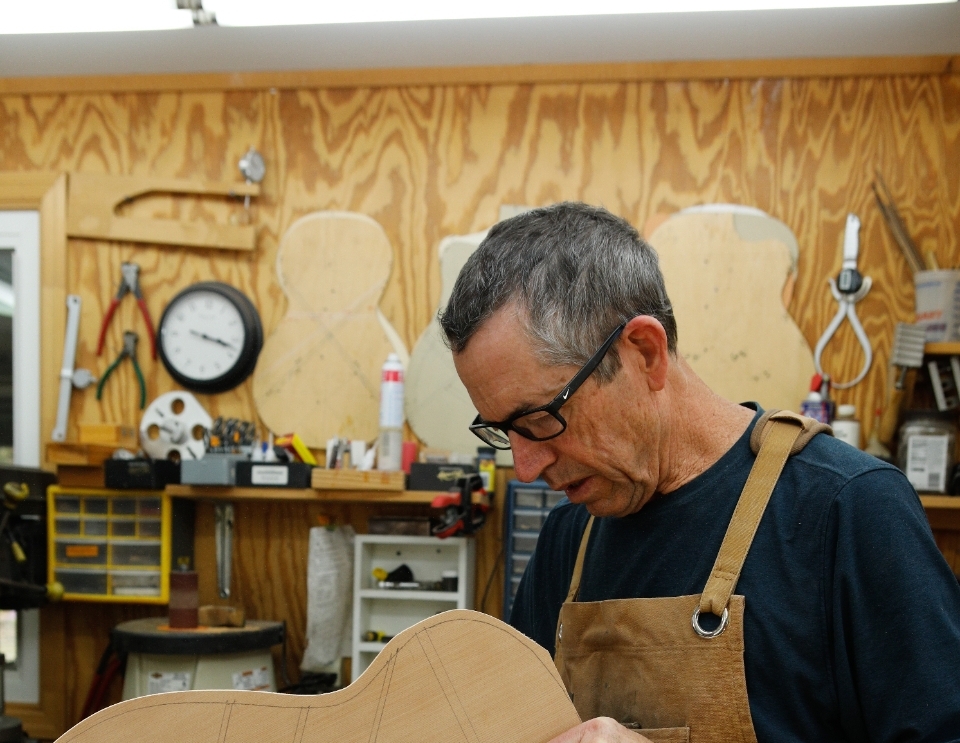 Luthier Jay Lichty works on the sound hole of his Luthiers for a Cause guitar to benefit Ukulele Kids Club. (Photo Courtesy of Corry Woods)

There is something profoundly unique about creating a piece of art that not only captures the eye, but also delights the ear. The tone that emanates from a finely crafted handmade instrument is special, the sound lingers in the air and fills your soul with a musical magic that can stay with you for a lifetime. 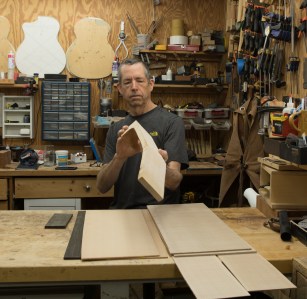 When you first enter the workshop of Tryon luthier Jay Lichty, you’re greeted with the delicate scent of exotic woods, freshly sandpapered from a guitar the artisan calls his Alchemist model. The Alchemist has distinctive body lines, with stunning inlays of abalone pearl and a unique side sound port that is one of the transforming aspects Lichty Guitars are known for.

The workshop is where the magic takes place. Each guitar, ukulele and fiddle is custom-made and handcrafted to artistic perfection. Building an instrument is a tedious process that takes Lichty several months to complete for each. Custom-made, one-of-a-kind instruments also fetch a handsome price. Baseline guitar models start at $8,500 while ukuleles command $4,500 as a starting point.

“Most folks who invest in a Lichty guitar or ukulele are every day or casual musicians,” says Lichty as his wife, business partner and PR extraordinaire Corrie Woods joins him in the workshop while he hand-sands the Alchemist and checks on the finish of an archtop ukulele. “But there are a handful of world-class professional musicians who I’m proud to have built instruments for.” 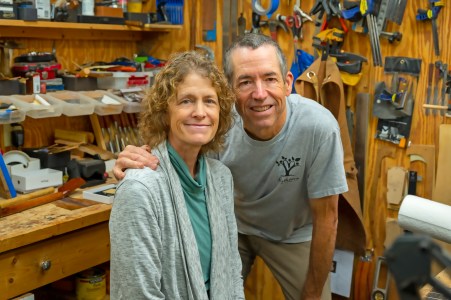 Jay Lichty and Corrie Woods in the workshop of Lichty Guitars in Tryon.

“Mostly – I build instruments that I’d like to play,” says the ever-smiling luthier surrounded by chisels, clamps, belt sanders, band saws, a variety of customized templates he’s created over the years, as well as a shelf full of exotic tone woods to meet client’s desires and specifications. 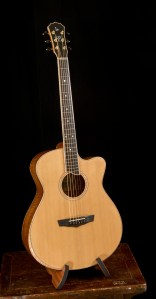 He picks up a guitar that is finished and begins to coax melodic notes from the instrument. Lichty is an accomplished guitarist, mandolin and banjo player and is a member of the local indie Americana and blues band Mercury Rising.

His first foray into music came during his college days at Mars Hill College when he was a member of the Stone Chiggers Band, Lichty says with a laugh. Lichty credits hearing fellow Mars Hill student, Art Brooks, who was playing a banjo during registration in the mid-1970s as a person who opened his mind to new musical genres. The sound and picking pattern of the banjo mesmerized Lichty and set him on a path of musical discovery that continues today. While music always fascinated Lichty, he spent the first 35 years of his career as a custom home builder and carpenter.

“When the 2008 housing crisis hit, the phone stopped ringing,” says Lichty as he reflects on his shift to full-time luthier. “It was a stressful industry, I worked 12-to-14-hour days and there was little time for family, so I was ready for change.” 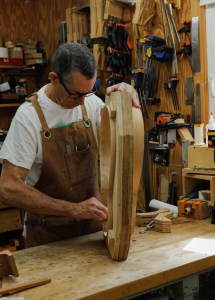 Luthier Jay Lichty begins the process of shaping a new guitar that will be part of the 2022 Luthiers for a Cause charity to benefit Ukulele Kids Club. (Photo Courtesy of Corrie Woods)

Lichty built his first ukuleles as a hobby in the couple’s garage during the housing industry lull, but his love of music and passion for building instruments took off when he completed his first guitar under the tutelage of Virginia luthier Wayne Henderson. Lichty is now closing in on 400 instruments built since 2009. His guitars and ukuleles have shipped to clients in more than 20 countries with the most expensive guitar commanding almost $20,000.

With these numbers comes respect in the industry, and the opportunity to involve yourself in causes that make a difference.

“A core part of the mission at Lichty Guitars is to give back to the community,” says Woods who documents her husband’s craft with camera in hand. Working together is something they both treasure and is reflected in their interaction with each other and the pride they share in both the work and the causes they associate with. “We are proud to serve on the advisory board for the Ukulele Kids Club (UKC), an organization that serves hospitalized kids through their illness and with music therapy in the U.S. and globally. UKC literally puts ukuleles in kids’ hands and they can take them home after they’ve completed their stay in the hospital and can continue to explore music.” 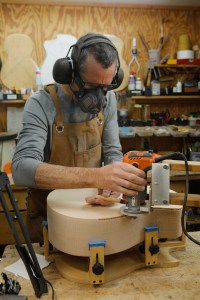 Luthier Jay Lichty uses a circular sander on his Luthiers for a Cause guitar to benefit Ukulele Kids Club. (Photo Courtesy of Corrie Woods)

The couple was also instrumental in creating Luthiers for a Cause in 2017, when six renowned ukulele builders from around the world donated their time and talent to craft one-of-a-kind ukuleles with wood from a legendary tree that fell in Hawaii. The intent was to raise money and awareness for the Ukulele Kids Club. The auction of the instruments raised more than $130,000 with all proceeds going to the children’s charity.

The latest iteration of Luthiers for a Cause is currently underway with Lichty and three other master guitar builders – Steve Grimes, Peter Robson, and Ben Wilborn – each crafting a one-of-a-kind guitar out of maple and Sitka spruce with all proceeds going to UKC.

Luthiers for a Cause is partnered with Dream Guitars for the “auction” of the four guitars. Dream Guitars is one of the most respected guitar shops in the world and features some of the finest guitars made.

“Dream Guitars jumped in and said we’ll do it,” says Lichty. “It’s just a huge giveback by them (Dream Guitars), as well as my fellow luthiers – we’re doing it all for nothing in return because we believe in what we’re doing for the kids.” 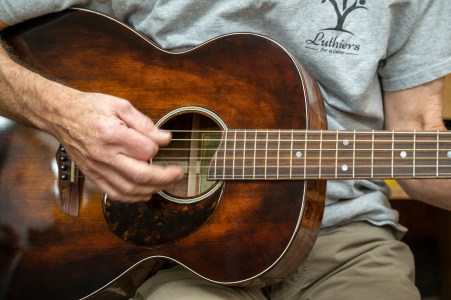