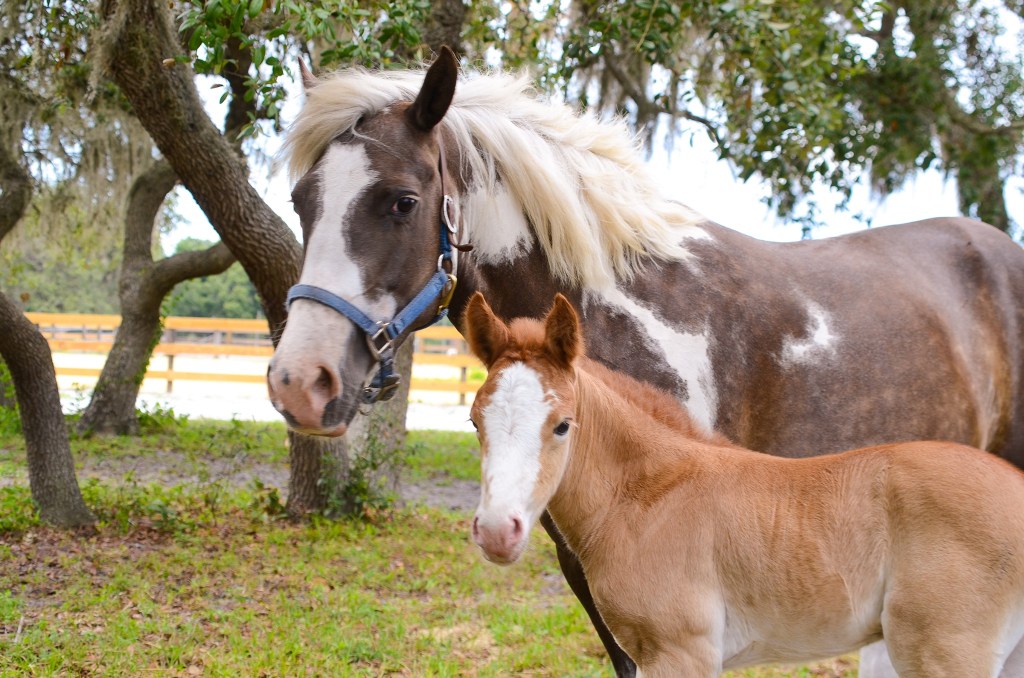 Since I stepped up as a celebrity “spokespony” for Helping Equines Regain Dignity (HERD), there have been four remarkable foals safely born with us. Our first surprise was the buckskin colt, Titan. We had no idea his mother was pregnant when we saved her from slaughter in the winter of 2017. Nadia was paper thin. How she carried Titan full term, in such a weakened condition, amazed us. What a wonderful surprise to find a big healthy foal one morning standing to nurse his doe-eyed mother. 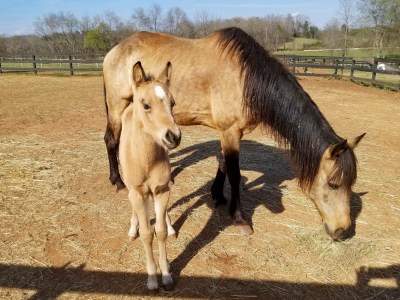 Elaine Jankins, a Campobello foster mom, took amazing care of Titan and Nadia. She and her husband Larry adopted the colt. Nadia was adopted by another local family in the Tryon area. The Jankins researched Titan’s pedigree, securing his double registration papers as a buckskin foundation quarter horse. This year Titan turned age four. He is taking life in stride under saddle with a bright future ahead. He is the definition of perfection for his breed. To think he was almost never born! How does this happen to so many pregnant mares, which end up in the slaughter pipeline?

We know that Titan’s mother was registered and that she was bred to a top-quality stallion. The owner knowingly sold her pregnant with her papers at an auction. She was shocked to learn that this valuable, trained horse ended up some distance away in Texas, without her papers, starved, and headed to slaughter across the border. This mare was bred to a prize-registered stud. Once she was separated from her papers, her value dropped to meat pricing. 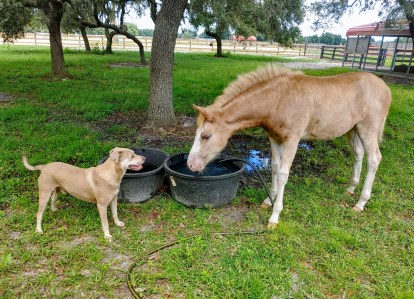 Willow was the next leggy gift born in HERD. Her mother, Arizona, a striking pinto Welsh pony, was saved with her tiny chestnut pinto foal Sedona at her side. Once again, we had no clue that Arizona was bred back and was pregnant when we purchased her from a kill lot. Sedona and her mother were delivered to our farm in the summer of 2019. Sharing the trailer with them was palomino pony Goldie, with her three-month-old colt, Hercules. HERD saved them from a deplorable situation as well.

Both Sedona and Hercules were only weeks old when they ended up in the worst of places. The two pony mares, with their young nursing foals, were kept here together in a pasture. Hercules and Sedona enjoyed playing under their mothers’ watchful eyes. When these two foals were old enough for weaning, their mothers moved to a new field. This is when we noticed that Arizona was developing a belly bump. A vet check confirmed there was a foal coming next spring.

It was Buster, our former stray farm dog, who alerted us to tiny Willow’s arrival. He kept watch over Arizona, staying a few feet from her paddock the morning Willow made her grand entrance. With four tall stockings, and a wide blaze complementing her red roan coloring, Willow resembled Sedona. It turns out through investigative research that Arizona had been bred to a Haflinger stallion to produce these two pretty daughters, born 11 months apart, so they indeed were full sisters.

Next came the arrival of the jet-black mare, Navajo. She too was clearly a fancy-bred quarter horse that surely had registration papers somewhere. We saved her at last call. In the kill pen, she had a handsome pinto colt at her side. He was purchased separately, and his mother was frantic as her foal was taken from her side. Navajo arrived to us very slim. She was extremely reserved. When it was verified that she was in foal, we realized we had to get her more accustomed to handling quickly as she was not a fan of humans at this point in her life. 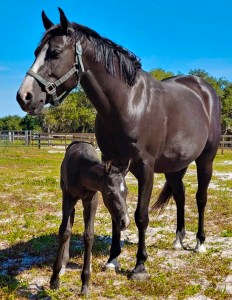 Navajo’s colt, Ming, was born in the same paddock where Willow had entered our world. However, this time Buster steered clear. In fact, when my mistress Heather Freeman and volunteer Bill McClelland went in to remove the afterbirth, Navajo charged with teeth showing, ears pinned and spun to kick at them. She was clearly saying get away from my foal. After losing her first one under such a stressful situation at the kill pen, she was not going to let that happen again.

Stout, and sporting a black silky coat, Ming was born with a perfect number six, swirled in white, on his face. Navajo made it impossible for us to work with him the first six months. We had handled Willow from the moment she was born, but Navajo would not allow us near Ming.  She remained so defensive we had to wait until he was old enough to wean to get our hands on him to halter break this aloof colt. However, once separated from his mother, Ming transformed into a friendly young gentleman. Now over a year old, he shows signs that his sire is a thoroughbred or appendix quarter horse. Ming will grow up to be around 16 hands.

On April 16, 2022, Avenue of The Stars arrived at sunrise, the colt of the fancy paint halter horse, Mystic, who was also saved from slaughter. Buster once again was at his observation post, as accommodating Mystic did not object to his watch. She welcomed Heather and volunteer Kathy Neiman to touch her newborn foal. What a relief to us all! 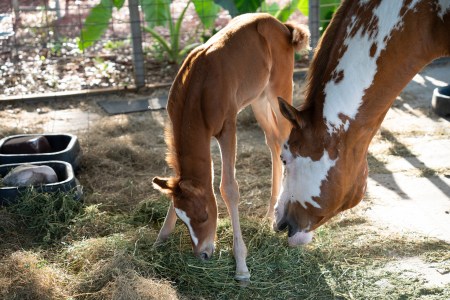 Avenue of the Stars and Mystic

Avenue, the blazed-faced, bright chestnut colt has loads of spunk and huge, kind eyes. He delights us all with his playful antics. Avenue gallops along the fence line with his neighboring donkey friend and rubs noses with this large jack’s black and white goat companion. His mother watches contently, amused that he has such colorful friends. Avenue is also extremely vocal just like his sweet mother.

The foals birthed here on the farm are all so unique and only know the best of care and compassion. Although we had no idea any of these equines existed when we rescued their mothers, I can affirmatively state we are overjoyed to have them born in our HERD. 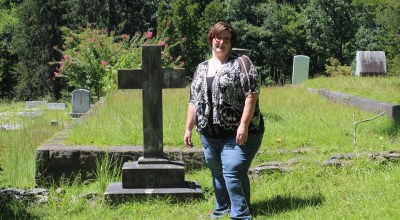