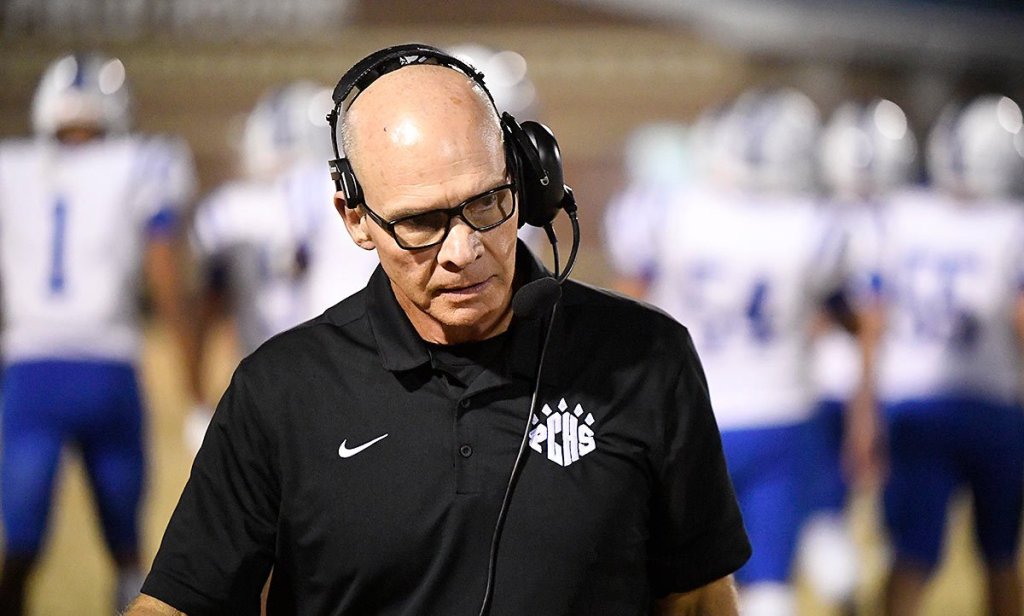 Family has always meant everything to Bruce Ollis.

That starts with his immediate family – his wife, Jane; their four children, Lauren, Jim, Austin and Jordan; and four grandchildren who all think their Grandaddy O is the greatest.

There’s also Ollis’ football family, the brotherhood of men he has coached and coached with throughout 43 seasons on sidelines in three states. Some of those men, from his early coaching stop at Lenoir-Rhyne University, watched Polk County’s recent playoff loss to Maiden, then came onto the field to talk with Ollis and take a group photo.

That special moment also proved to be one of the last of Ollis’ coaching career. The veteran head coach informed Polk County players and coaches on Monday of his decision to retire at the end of the 2022-23 academic year, also tendering his resignation immediately as the Wolverines’ head coach in order to allow the search for his replacement to begin.

Family, not surprisingly, sat at the heart of that choice, especially after Jane Ollis, herself a longtime educator, retired a year ago.

“I actually got very jealous during the time that Jane was able to pick up and fly to Connecticut (where Jim Ollis and family live) or fly out to see Jordan coach in California or drive to Nashville to see Ellie Bell (his granddaughter),” Ollis said. “It just wound up being something that I want to be part of.

“That has nothing to do with the job here. Polk County High School is near and dear to my heart. For me, it’s been my best time personally, professionally, from a family standpoint, from a football standpoint. It will always be close to my heart.” 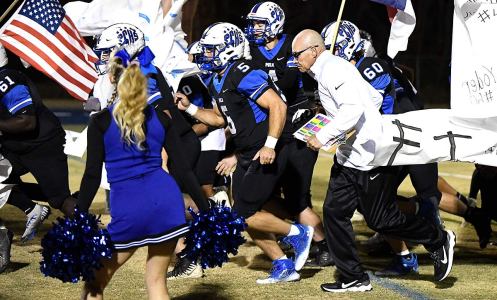 Six of his Polk County teams won 10 or more games, including a 12-2 mark in 2010 that set the school record for victories in a season. Ollis-coached teams won eight or more games from 2003-13 and again in 2017 when he returned from T.L. Hanna, a streak of 12 seasons.

He has been a head coach continuously since taking over at Butler, Ga., in 1987, compiling a career 237-183 record at five schools – Butler, Lee County (N.C.), Crescent (S.C.), T.L. Hanna and Polk County. Ollis began his coaching career as an assistant at Laurens, S.C. and then moved to Lenoir-Rhyne before taking the Butler position.

Ollis plans to remain at Polk County through the end of the 2022-23 school year and assist in the coaching transition.

“The reason for doing this quickly at the end of the season is that we need to go ahead and find a replacement and get somebody hired and get them in here, have them be here for spring football and that type of thing,” Ollis said. “When I was hired back in 2002, I came in on the last day of school and met the players. I told Aaron, let’s do better this time.

“I’m still going to be involved in helping here and finishing out the school year, getting everything organized from a logistical standpoint as far as clothes that need to be ordered and balls and those kinds of things. I’ll still actually be involved in my job here.”

Ollis admits that it will be “weird” when August arrives not to be involved in preseason practice. There is a chance his time on a football sideline may still continue; his youngest son, Jordan, just completed his second season as the head coach at Chadwick Academy in Palos Verdes Peninsula, Calif., and Ollis said he might assist him during the season “if the price is right.”

“I’ve always used the pat answer to resigning, or retiring, that I’ve thought about retirement but not retiring,” Ollis said. “Last June, when Jane retired, the thought was in the back of my mind that I’ll be 66 in two months. I get about full Social Security and full teacher pay and make more money than I’m making now, and I can go see my four grandchildren whenever I want.”