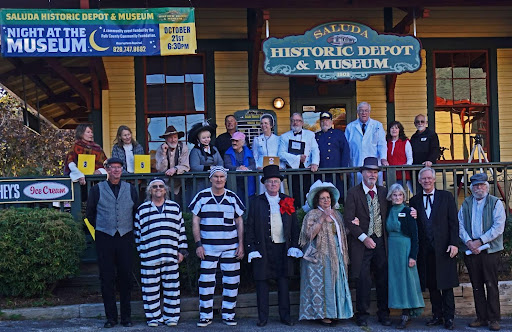 Cast from Night at the Museum presented at the Saluda Historic Depot and Museum.

Night at the Museum was presented at the Saluda Historic Depot and Museum on Friday, October 21.

Night at the Museum included 8 historical vignettes performed throughout the Depot by Depot volunteers and other familiar Saluda residents dressed as characters from Saluda’s past.

The program featured eight historical vignettes depicting events in the history of the railroad and the town of Saluda. Visitors traveled back in time where they met:

Food and beverages were served in the Moon Glass Studio garden area. The Saluda Visitor Center was open and featured the drone video of the Saluda Grade as it now looks. Moon Glass Studio and Jim Carson’s Studio were open and there was also live music provided by Todd Neel and band.

It was a beautiful fall evening with our neighbors and friends. Night at the Museum was funded by a grant awarded by the Polk County Community Foundation.