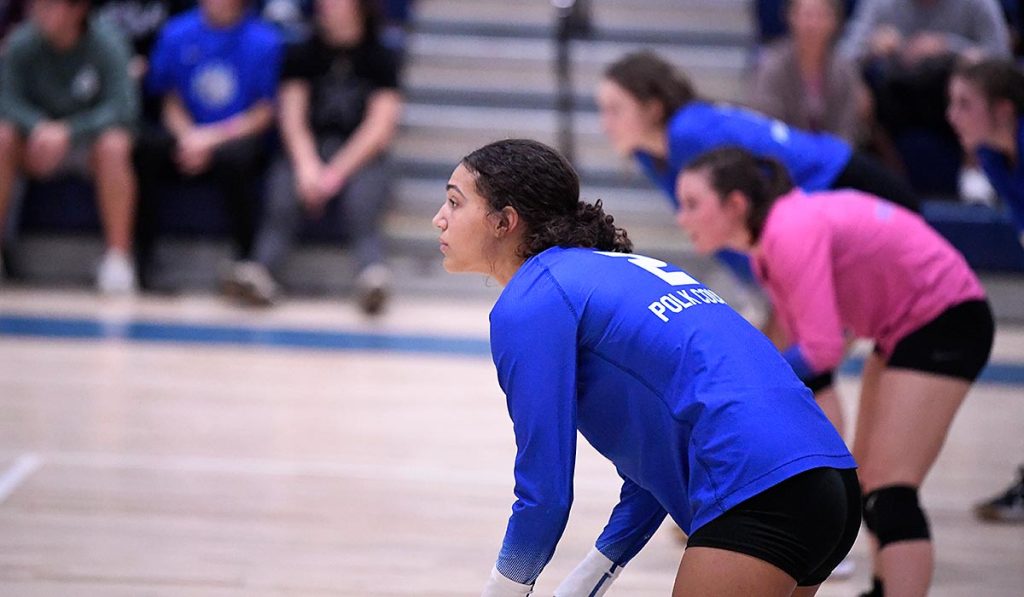 A long road trip no doubt felt much like a longer ride home for Polk County.

In time, though, the sting of Thursday’s 25-20, 25-10, 13-25, 25-20 loss at East Surry in the third round of the state 2A volleyball playoffs will subside, and remaining will be pride and satisfaction in one of the best seasons in school history.

*Polk defeated three 3A playoff qualifiers – Kings Mountain, West Henderson and Enka – with Kings Mountain and West Henderson ending the season ranked in the top six among 3A West teams in the NCHSAA RPI ratings. Polk also had wins over two of the top 11 teams in 2A in Brevard and Patton.

And had the flu not struck Polk County two weeks ago and rolled through the Wolverine roster, who knows? Perhaps a different opponent in a different location would have awaited Polk rather than an East Surry squad hitting its stride for the postseason.

The Cardinals (24-3) relied heavily on their outside hitting combination of sophomore Merry Parker Boaz and junior Bella Hutchens, the Foothills 2A Player of the Year, and the two helped lead East Surry to its 18th straight victory. The Cardinals advance to a quarterfinal showdown with top-seeded McMichael on Saturday.

Polk County (23-4), though, more than held its own against the fourth-seeded Cardinals from the outset. Though Hutchens opened the match hammering home kills at regular intervals, Polk kept pace in the first set, never letting East take a lead of more than three points for most of the game.

A Sophia Overholt kill late in the set cut East’s lead to 22-20, but a service error returned the ball back to the Cardinals, and Hutchens and Boaz closed the set with kills for a 1-0 lead.

East then stunned Polk with an 11-1 run to open the second set, Hutchens and Boaz again doing most of the offensive damage with some help from freshman Maggy Sechrist. The Cardinals kept the lead in double digits throughout the set and closed on a Polk error for a 2-0 advantage.

But the Wolverines were unfazed by the deficit. Polk County roared out of its huddle and raced to a 7-2 lead in the third set, forcing an East Surry timeout. Mia Bradley and Morgan Yoder blocked Hutchens out of that break, and Sophia Overholt dropped two kills to boost the lead to 10-2. The advantage soon reached double digits.

East Surry rallied late to within 19-12, but Polk County closed the set with Bradley hammering three kills and Overholt adding another for a 25-13 win.

The fourth set started much like the opening set, with East leading early. Polk fought back to tie the match at 9-9 on a Yoder kill, but the Cardinals responded with six straight points for a 15-9 advantage.

Yet here again came Polk, refusing to yield and pulling within 19-17. The Cardinals stopped the run with two points, leading to a Polk County timeout. The Wolverines regained the serve, but at 22-19, Boaz put down a kill and Hutchens drilled a cross-court kill to move the Cardinals to match point. Yoder responded with a kill, but Hutchens closed the match with another one to seal East Surry’s win.

Yoder and Overholt each finished with nine kills, with Bradley adding seven and Ada Kelley notching five. Yoder also had five blocks while Overholt finished with a team-high 28 digs.

The loss marked the final match for Polk seniors Scruggs, Waldman, Lisa Jones, Annslee Kilgore, Jocelynn Ramirez and Elysia Smith. They helped the Wolverines post a 44-17 record over the past three seasons.

And that’s something to remember no matter what road is being traveled.