Life in our Foothills October 2022 – A gem in the Valley : Tryon Country Club 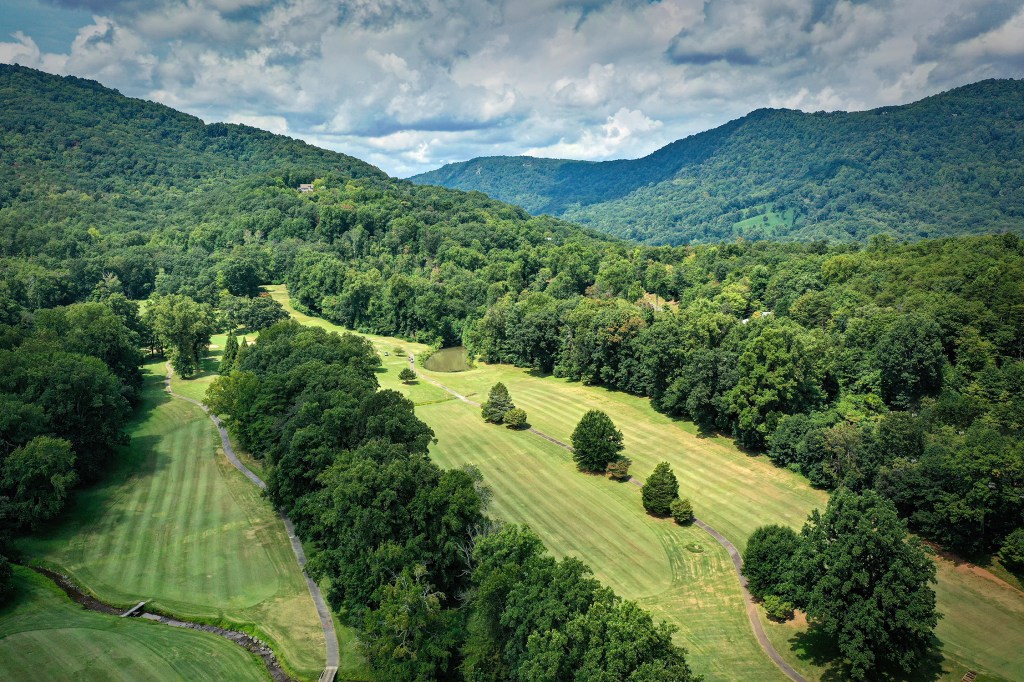 Donald Ross built the course to follow the natural contours of the mountain valley.

There once was a young Scotsman who landed on these fair shores with $2 to his name and dreams of creating golf links that would one day rival the master himself, Old Tom Morris, the legendary golf pro and architect from the Old Course at St. Andrews, Scotland. The young man, Donald J. Ross, would craft his playing skills, build clubs, and learn greens keeping at Royal Dornoch Golf Club, but it was his apprenticeship under Morris at the Old Course where he fine-tuned his craft and gave flight to his dreams of coming to America.

Ross seized his opportunity in 1899 when he accepted a job at Oakley Country Club in Massachusetts and set sail for America, but it was his appointment the following year as golf professional at the Pinehurst Resort in North Carolina that would forever seal his place in the annals of golf history. 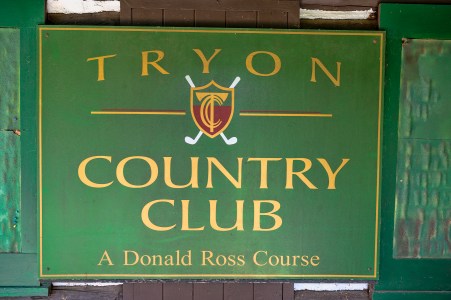 The Tryon Country Club is one of the oldest Donald Ross-designed courses in North Carolina.

It was in the sandhills, set among the Carolina pines, that Ross began to realize his dream of designing golf courses, including what would become one of the most famous and history-rich golf courses in the world, Pinehurst No. 2 which he completed in 1907.

Around this same point in time, says Tracey Beaver who is instrumental in the compilation of history for the Tryon Country Club (TCC), local philanthropist, artist, and author Emma Payne Erskine set her sight on building a golf course, one built with distinction that would help set the town apart from other mountain destinations and establish Tryon as a social, artistic, and recreational destination.

Erskine and her husband, Charles built the Lynncote estate in 1895 on the outskirts of Tryon. Shortly after Charles’ death in 1908, Erskine purchased a dairy farm cradled within the mountains just west of Lynncote with the intent of building her golf course. 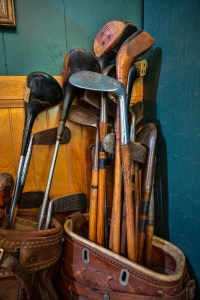 Clubs made of hickory and steel make you feel as if you’ve stepped back in time at Tryon Country Club.

With rave reviews of the Pinehurst No.2 layout, Ross was sought to design and build courses across the country. Erskine traveled to meet Ross at the Grove Park Inn in Asheville and was able to retain him to build her golf course on the dairy farm. According to the Donald Ross Society list of courses, the Tryon course was laid out in 1914 and would open for play in 1916, making it one of Ross’ oldest courses built in North Carolina

Ross designed the nine-hole layout to play to 18 holes by utilizing two different sets of tee placements, one set for the front nine and another for the back nine, within each hole’s tee box. It allows for a challenging 18-hole, par 72 course. The layout utilizes the natural contours of the land, which Ross was known for, in the valley formed by Little Creek.

The Tryon Country Club is listed on the National Register of Historic Places by the U.S. Department of the Interior. The rustic clubhouse and pro shop are literally a step back in time. Both are log cabin-style built in 1922 and were relocated to their present site on the north side of the course after the original clubhouse was replaced. 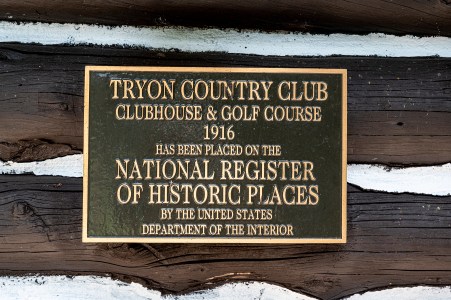 The Donald Ross-designed Tryon Country Club golf course is on the National Register of Historic Places.

They look distinctive with white chinking between the logs. The clubhouse features impressive post beams, original hardwood floors and a welcoming stone fireplace. It is not hard to imagine a scene from the past of a warm fire and gathering of golfers, sharing their stories of the day’s round with a flask or two to provide aid to the tales of missed approach shots or lipped-out putts.

The pro shop has its own charm with a nostalgic nod to golf’s history. The pro shop is a place that draws you in and causes you to pause and appreciate the game. There are several golf displays and canvas golf bags holding clubs made of hickory and steel. There’s also paraphernalia from a more genteel time when golf was a gentleman’s sport. A photo of Old Tom Morris and a framed copy of the original Rules of Golf hangs on the wall. There’s also a fascinating photograph, pre-1940, of the fifth hole that shows one of the original rectangular oiled-sand greens Ross designed and built.

When you walk onto the deck that overlooks the ninth green, you see the same vista that must have captured the eye and fascination of Ross as the Scotsman envisioned his small Tryon jewel.

Lore hangs as thick as the mountain mist that sometimes nestles between the peaks surrounding the golf club. Member Joey Prince took a moment before his chipping lesson to share a few tidbits about the club and some of its history that he finds of interest. 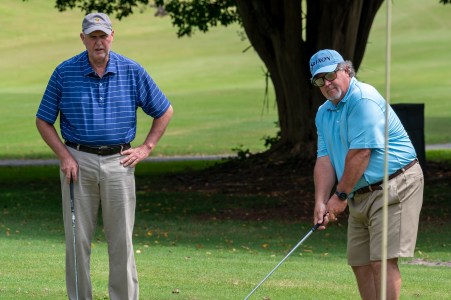 “First of all, there’s not a more beautiful place to play golf than here in the fall – it’s absolutely stunning,” says Prince as he surveys the beauty of the undulating course spread across his view. “There used to be a cabin across the way on the hill behind the fifth hole and there was a spring between the cabin and clubhouse (pointing to a stand of trees separating two holes). The family that lived there would bring down milk and other food that was perishable and place it in the spring to keep it cold.”

Prince says there was a second spring on the ninth fairway that used to provide golfers with fresh, cold mountain spring water while they were playing.

He also shared a lesser-known piece of golf history about Ross. The architect was originally slated to design Augusta National which is home of The Masters golf tournament. According to various historical records, Ross and Bobby Jones had a handshake agreement to design a course for Jones near his Atlanta home. However, during the 1929 U.S. Amateur golf tournament, Jones unexpectedly lost his first-round match at Pebble Beach.

With time on his hands before his travel back to the East coast, Jones spent the week playing Cypress Point on California’s Monterey Peninsula and got to know the course architect Alister McKenzie. Jones made the decision to hire McKenzie over Ross for Augusta National. It was a decision that many say got under Ross’ skin.

The hiring of McKenzie thrust the Scotsman to re-dedicate himself to his craft, and Ross put his refocused energy into perfecting Pinehurst No. 2 into the golf masterpiece it is today. In all, Ross is credited with designing and building more than 400 courses throughout his illustrious career. 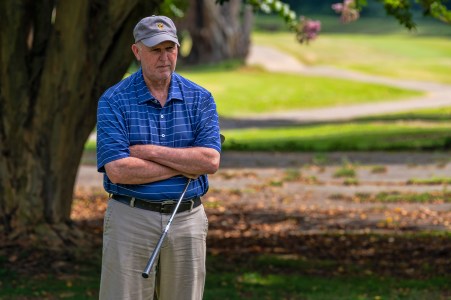 Perhaps no one appreciates Ross’ Tryon course layout more than USGA professional Gerald Weathers. He’s been a golf pro for more than 30 years and is only the tenth head pro in the 106-year history of the TCC.

Weathers says he’s been fortunate to play a number of Donald Ross courses, but clearly he is most proud of his association with and of the standing of TCC.

“The golf course is on very solid footing, and we’ve been able to make a lot of small improvements to maintain the quality of the course while remaining true to the original Donald Ross design,” Weathers says while looking at the tee schedule for the upcoming weekend. “We have a very solid grounds crew, and they keep the course in excellent condition.”

Weathers says the overall course is much like it was when first built, except for the oiled-sand greens that were replaced with grass in 1940. He says the holes remain as Ross laid them out, so playing the course truly is a step back in golf history.

For anyone fortunate to play Ross’ gem in the valley, the Tryon Country Club remains what Erskine envisioned for her tiny dairy farm, a golf course of distinction that still charms members and guests in this mountain destination. 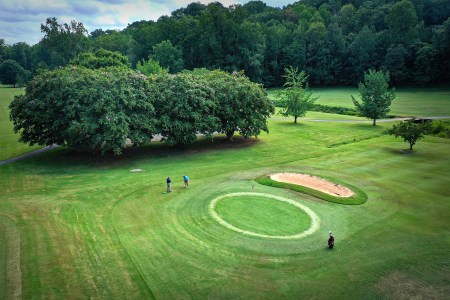 Donald Ross built some of the most famous and history-rich courses in America and the layout at Tryon Country Club is one of the oldest courses in North Carolina.

Story and Photography by Terry Brown