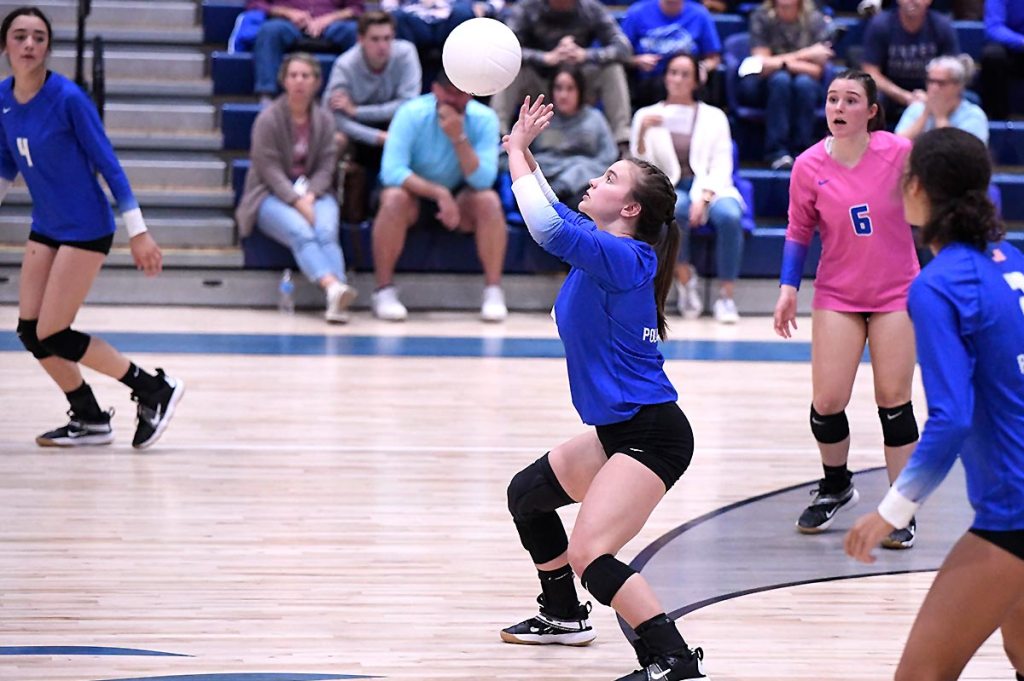 By the third set Tuesday, Pine Lake Prep fans were openly wondering how the Polk County squad at the time dismantling their pride entered the playoffs as the 2A West’s 12th seed.

Testament to how well the Wolverines played and the strength this season of the Mountain Foothills 7 Conference.

Polk County may not be fully recovered from the sickness that ran rampant through its roster the past few days, but the Wolverines still had ample ammunition to top fifth-seeded Pine Lake 3-0 in the second round of the state 2A volleyball playoffs.

With the 25-18, 25-21, 25-11 victory, the 23-3 Wolverines matched a school record for single-season wins and advanced to a third-round matchup at East Surry. The 23-3 Cardinals, the fourth seed in the 2A West bracket, swept Randleman to earn that home matchup on Thursday at 6 p.m. It will be the first meeting between the two schools since Polk’s visit for the 2018 1A West Regional championship match, which the Wolverines won in four sets.

Thursday’s trip will no doubt offer a highly challenging encounter. So did Tuesday’s affair against a Pine Lake Prep squad (16-7) playing its first match of the season against a public school after seeing nothing but charter school opponents throughout the regular season.

The Wolverines aced the test.

“I’m proud of them,” said head coach Molly Hill, herself recovering from illness. “I think we came alive in that third set. It was faster and more aggressive and we just played much better. We had control of the game the whole time, and I was pleased with that.”

With a trio of freshmen seeing extensive playing time, the Pride held their own during the early stages of both the first and second sets. The opening game remained close until midway through when Polk put together a 7-1 run to take a 21-11 advantage. Pine Lake’s Cameron Wilbanks helped serve the Pride back to within six points before Polk closed the set for a 1-0 lead.

The pivotal second set stayed tight for some time, tied at 10-10 before the Wolverines inched ahead 13-10 on an Elena Carroll kill, a Pine Lake error, and an Ella Waldman ace. At 16-13, Morgan Yoder and Mia Bradley teamed for a block, Yoder served an ace and Elysia Smith added a kill to boost the margin to 19-13.

Pine Lake fought back to within 20-18 and still trailed 21-19 when an error gave Polk a point and the serve. Yoder scored a point with a tip and Waldman served another ace to make it 24-19 before the Pride won the next two points for a 24-21 Polk lead.

The set ended, though, in the Wolverines’ favor on the unlikeliest of shots, Sophia Overholt bumping a short shot over the net that two Pride players watched fall to the court.

Polk then raced to a 12-2 advantage in the third set, sparked by a Yoder serving run that included four aces in a span of five serves. Delivering kills with regularity, the Wolverines steadily pulled away and ended the match on an Ada Kelley push shot.

Perhaps most crucially for the evening, Polk County did not record a service error on any of its 73 attempts. That helped the Wolverines play well from the outset.

“I think it’s always important to win that first point and always the first set. It sets the tone and gives you a boost of confidence,” Hill said. “So I was pleased we did that.

“I think it helped that we left early and we stopped and had a good meal. We tried to take our time and not feel rushed, and I think that was a plus.”

Amberlyn Scruggs had 15 assists and Zaelea Eller had seven, with Waldman posting 11 digs and three aces.