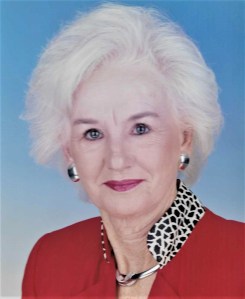 Lake Bowen– Dr. Freda V. Crews, 86, of Lake Bowen, SC departed for her heavenly home and into the presence of her Lord and Savior Jesus Christ on Friday, October 21, 2022. She passed away at home, surrounded by her loved ones, following a lengthy illness. She was born March 17, 1936, in Olustee, FL to the late William H. and Martha Crawford Green and was the wife of the late Dr. William R. Crews.

Dr. Crews was born in Olustee, FL and grew up in Lawtey, FL. She was a graduate of Bradford High School in Starke, FL. She was employed at the Bradford County Courthouse where she was assistant to the County Judge, until her marriage to her late husband, Dr. William R. Crews. She soon began to travel with her husband, in pursuit of their educations. She assisted her husband with pastoral duties and devoted her life to ministry while raising a family.

She completed her master’s degree at North American Baptist Seminary in Sioux Falls, SD. The first woman to graduate from Trinity Evangelical Divinity School, Chicago, IL, she earned a doctorate of ministry. Dr. Crews also completed a doctorate of philosophy at International University for Graduate Studies in St. Kitts, where she later held the position of Director/Dean of the International University for Graduate Studies School of Christian Counseling.

Throughout her life, Dr. Crews held many positions in ministry, while also assisting her husband in ministry as together they pastored churches in Florida, Texas, Michigan, Kentucky, Arkansas, Georgia, South Dakota, and South Carolina. She was ordained at First Baptist Church in West Coral Springs, FL on February 16, 1997. She was a faithful, obedient and dedicated servant to her Lord and daughter of The King. Throughout all her education and ministerial pursuits, she remained a loving and devoted wife, mother and grandmother.

Dr. Crews, along with her husband, founded Bible Study Time, a Spartanburg, SC based non-profit ministry, in 1974 where she held the position of CEO until the time of her passing. Dr. Crews was the Pastor of Hope for Living Media Church, and founder and speaker for the Truth for Living radio program until she passed. She was the founder and host of the Time for Hope International Television Ministry, and a member of the National Association of Religious Broadcasters.

Dr. Crews was a presidential member of American Association of Christian Counsellors, a Licensed Professional Counsellor, a Board-Certified Professional Christian Counselor, and founder of the Cherokee County Suicide Prevention Hotline. In 2007, Dr Crews was Woman of the Year from The American Biographical Institute. She was awarded, in recognition of achievement in the way of outstanding contributions in the fields of Business, Theology and Professional Counseling, the 2007 Business Theology and Professional Counseling Award and the 2000 Outstanding Intellectuals of the 21st Century. Dr. Crews was a Charter member of The American Association of Christan Counselors, she was the Chairman of the Executive Board, and Established and Directed the Counselor Care Program. She was a contributor for “The Soul Care Bible”, a contributing author and columnist for The Christian Counseling Connection, as well as authoring and published her own book, “Get Off Your Own Back”.

Dr. Crews was also a very accomplished private pilot. She earned her multi-engine, instrument and commercial ratings with over 1,000 hours of flight time.

Memorials may be made to Bible Study Time, Inc. P.O. Box 1714, Spartanburg, SC 29304.
An online guest register is available at www.floydmortuary.com