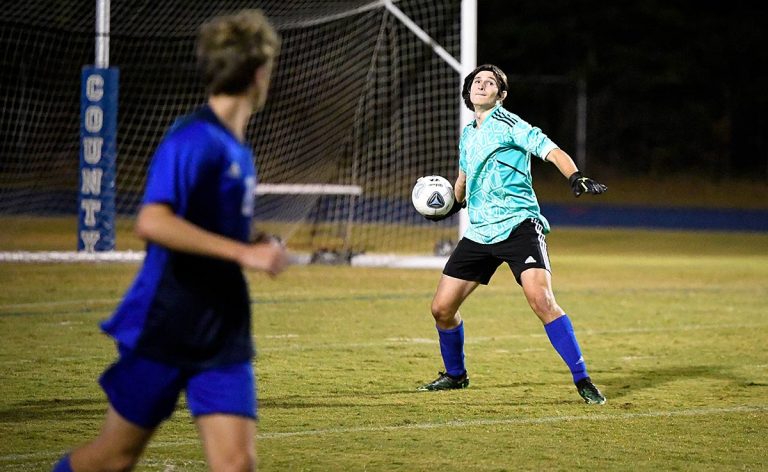 As the Wolverines were celebrating Senior Night, Corn opted to keep his seven seniors on the field as much as possible and give them a chance to win their final match in G.M. Tennant Stadium.

And that they did.

Cole Pereira scored a pair of first-half goals and the Wolverines kept Chase at bay to record a 2-1 victory over the Trojans in a Mountain Foothills 7 Conference match.

Pereira’s brace enabled Polk (4-12, 4-5) to defeat Chase (5-10, 1-9) for the second time in five days and ensured the Wolverines will finish at least fifth in the MF7 standings. Polk County travels to East Rutherford and Brevard next week to conclude its regular season.

“I tried to allow the seniors the opportunity to win this game,” Corn said. “A two-match winning streak. If we can finish out, I think that would be a big statement for the program.”

A nice sequence in the 12th minute led to the Wolverines’ first strike of the chilly evening. Nathaniel Rhein stopped a Chase surge into the penalty area, tipping the ball away to Nate Martinez, who dribbled to near midfield before sliding across to James Purtill on the left wing. Purtill then sent forward a perfect pass that allowed Pereira to outrace two defenders and strike a low drive into the left side of the net for his first tally of the evening.

Chase answered minutes later with a free kick from deep on the left wing that just dipped inside the near post. But the Wolverines answered in the 31st minute as Elliott Whiteside gathered a ball in front of the Polk goal, dribbled to near the Wolverine sideline and sent a long, bouncing pass forward that Pereira, again, won a sprint to possess. The senior took one touch, moving the ball into the top of the penalty box, then chipped a looping shot past the charging Chase goalkeeper.

And then Polk’s defense made that one-goal lead hold.

The Wolverines moved up to 37th in the 2A West RPI rankings with the win, and while climbing into the playoff picture even with two more wins may be a challenge, Corn would love to see Polk, easily playing its best soccer of the season, close on a strong note.

“If we can finish out, I think that would be a big statement for the program,” Corn said.