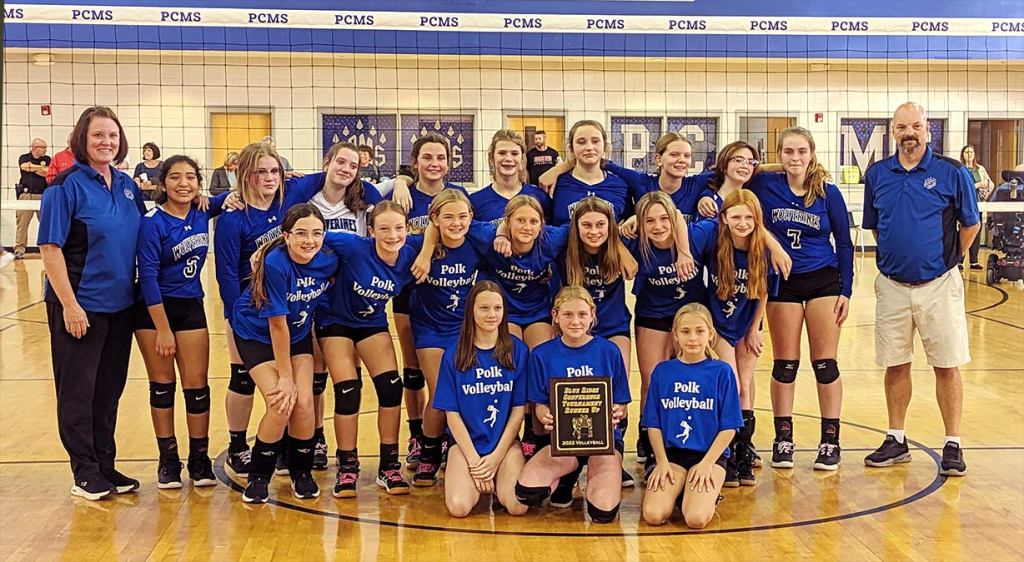 Polk County Middle’s home fans stood and cheered, longly and loudly. And well they should have.

True, Monday’s Blue Ridge Conference Tournament championship match did not unfold as they as well as Polk Middle’s volleyball team hoped. Macon Middle had much to do with that – the undefeated Panthers played well, extremely well early, and claimed the tourney title with a 25-12, 25-17 victory.

That’s the unfortunate nature of sports, that a season so bright and successful can end with an afternoon of tears. But Polk Middle head coach Kenny Hall, between the sobs, reminded the Wolverines of what they did accomplish this season and why all those people were standing and cheering despite a scoreboard that did read in their favor.

“We had a great season,” Hall said. “I’m super proud of everything this group accomplished. They made history. Being a champion is something no one can ever take away from them.

“It stings right now, but in time they will have a good feeling about this season and what they accomplished.”

For three-quarters of the first set Monday, Macon (14-0) did virtually nothing wrong. The Panthers served well, they hit well, they defended well. Macon played at such a high level that it prompted one observer to wonder how many high school teams the Panthers might have beaten with a similar effort.

At 21-7 in the first set, though, Polk Middle began to find its footing, and the Wolverines displayed why they finished as BRC East Division champions. Polk (13-2) matched points for the rest of the set, then twice rallied from deficits in the second set, first on three straight service aces from Reeve Carroll, then a run of three aces from Cate Brown that evened the match at 15-15.

But at 19-17, Macon’s left-handed dynamo Audrey Pressley helped fuel a run of six straight points that wrapped the match and allowed the Panthers to celebrate. The Panthers are the first West Division team to win the BRC tourney in at least seven years and most likely quite longer.

“They have a very good team,” Hall said. “It’s difficult to find any weakness in what they did, and they played well. That’s what it came down to, they were the better team today.

“We didn’t play terribly, but they just outmatched us in some areas. But with the group we have coming back, I’m already looking forward to next season.”