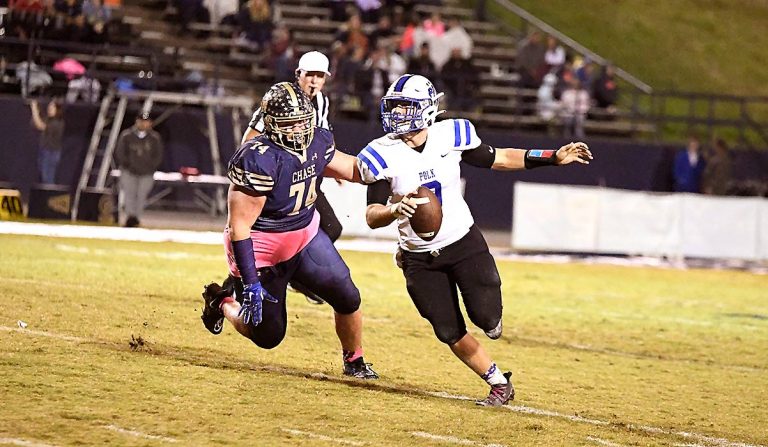 So sounded Friday evening the cannon that Chase fires after touchdowns. So went the Trojan offense in racking up those scores.

The big plays that Polk County head coach Bruce Ollis worried about this week came to pass – and run. Chase had five touchdown plays of 50 yards or longer, those propelling the Trojans to a 48-27 victory over Polk County in a Mountain Foothills 7 clash in Allen Stadium.

The undefeated Trojans (8-0, 4-0) needed every one of those explosive efforts, for the Wolverines (4-4, 2-2) did all they could to spoil Chase’s Senior Night. Polk forced three first-half turnovers, recovered an onside kick and took a 21-14 lead at halftime that could easily have been more.

The Wolverines could have used those additional points, too, as Chase apparently unlocked some type of offensive cheat code during the intermission. The Trojans ran 10 offensive plays in the third quarter and scored on three of them. Each had distance – Jalen Rudisill’s 62-yard sprint on the first play of the quarter, Brenon Austin’s 51-yard dash and Taivon Derisma’s 19-yard pass reception – and each left Polk County facing a 34-21 deficit entering the fourth quarter.

Polk, though, shook off the third-period blows and landed one of its own, Angus Weaver’s 22-yard touchdown run with 9:41 remaining that trimmed the deficit to 34-27. But Derisma took a short pass from Turner McSwain on Chase’s next snap and sprinted past the Trojan bench and to the end zone, the 71-yard scamper returning the Trojans’ lead to 41-27 with 9:23 to go.

The Wolverines’ ensuing drive stalled at the Chase 25, and Rudisill broke free for a 50-yard run with two minutes left to provide a final margin that didn’t quite reflect how the game unfolded.

“I think they had three one-play drives,” said Polk County head coach Bruce Ollis. “I don’t question our effort. Our effort was good. That’s a good football team. You can’t be undefeated this late in the season and not be a pretty good team. So my hat’s off to them and it looks like they may get to carry the banner for the conference this coming year.

“The chance to be conference champions is gone, but the opportunity to make the playoffs is still available. That will be our focus and we’ll come back and coaches will work on Sunday and we’ll find a way to win Homecoming.”

Polk turned just one of those three first-half turnovers into points, that Weaver’s 5-yard touchdown reception from Casey Beiler on the first play of the second quarter following a Karlen McEntyre interception. The Wolverines then surprised Chase with an onside kick, with Antonio Simpson tipping a free ball away from a Chase defender and recovering it at the Trojan 36. Beiler capped that drive with a 9-yard scoring toss to Keaundrae Green and Polk led 14-0 with 9:43 left in the first half.

Chase immediately answered with a 30-yard scoring reception by Isaiah Dodd, then forced a Polk punt on its next drive. An attempted reverse backfired on the punt, with McEntyre scooping up the fumble and heading for the end zone. Chase’s Jhari Mosley, though, tripped McEntyre up at the last possible moment at the 15, and that stop proved huge as Polk wound up settling for a 27-yard field goal attempt that sailed wide, keeping the Wolverine lead at seven.

“Special teams hurt us a little bit, and we’ve got to find a way to finish,” Ollis said.

Chase evened the score at 14-14 as Derisma took a slant pass from Turner McSwain and outraced the Polk secondary for a 54-yard scoring strike with 2:05 left in the half. The Wolverines answered with an efficient seven-play, 70-yard drive, Weaver capping that march with a 7-yard run with 30 seconds left to give Polk a 21-14 lead at the break.

McSwain finished 7-of-12 passing for 243 yards and four touchdowns, with Derisma catching three passes for 144 yards and three scores. Rudisill rushed for 144 yards on 10 carries, though 112 of those yards came on two touchdown runs.

Weaver rushed for 169 yards and two touchdowns on 25 carries, with Green catching five passes for 29 yards before leaving the game early in the third quarter with a shoulder injury.