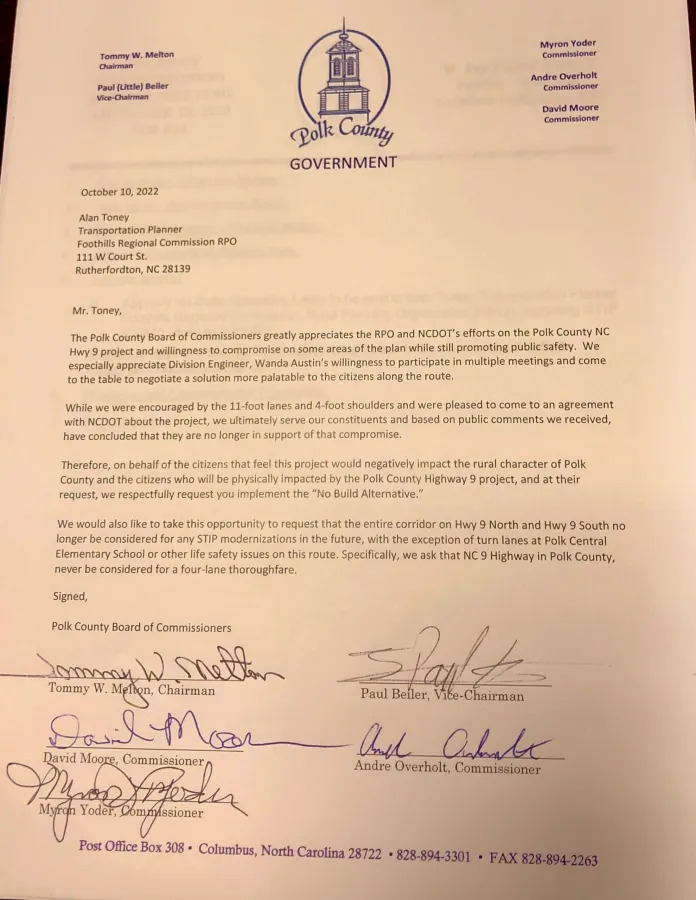 On Monday, October 10, 2022, during a special called meeting, the Polk County Board of Commissioners unanimously approved a letter in support of a “No-Build Alternative” option to the N.C. Department of Transportation’s planned widening of Highway 9.

This approved letter will now be sent to the Foothills Regional Commission’s Rural Planning Organization (RPO), which will meet to discuss the letter. If the RPO agrees with the Commissioners’ No-Build Alternative, it will be presented to the NCDOT, which has the final say on if the planned widening occurs. If the RPO rejects this course of action, the project will move forward. The No-Build Alternative letter is the final action that the Board of Commissioners can take regarding this project.

The RPO will consider approving the No-Build Alternative at its next meeting, which will be held at 10:30 a.m. on Wednesday, November 16, at the Rutherford County Administration Building (289 North Main Street in Rutherfordton). This will be an open meeting to the public, and anyone interested may attend.

The decision by the Board of Commissioners to address this issue comes after State and County Officials, including Representative Jake Johnson, County Manager Marche Pittman, and Commissioners, met with citizens, Foothills Regional Commission’s Rural Planning Organization (RPO) staff, and NCDOT staff to discuss the proposed project on numerous occasions since July. From the beginning, the Commissioners and citizens agreed that the original proposed plan, which called for 12-foot lanes and a six-foot paved shoulder, seemed too intrusive to property owners along Highway 9.

As an elected body that serves its citizens’ common good, the Commissioners and staff, reached out to NCDOT engineers to discuss the project to minimize the impact on the property owners along the proposed route.

At the Commissioners’ request, NCDOT held another public meeting on September 22, 2022, since the first public meeting with NCDOT was held in April 2019 and few members of the public attended. These meetings were to inform stakeholders and the public about the project.

After the second meeting, some property owners asked the County Commissioners to facilitate another discussion with NCDOT. This meeting was held on Friday, September 30, and NCDOT Division Engineer Wanda Austin attended and agreed to a compromise decreasing the lane width to 11 feet and the paved shoulders to four feet, for a total reduction of six feet across both lanes.

The following Monday, during the Board of Commissioner’s regularly scheduled meeting on October 3, citizens spoke during the public comment period requesting the Commissioners do not agree to the compromise, and approve and submit a “No-Build Alternative” letter for the Highway 9 widening project. During this meeting, citizen comments ranged from the negative impacts it would have on property owners to the impact on the rural character of Polk County.

The Commissioners explained that the letter would not guarantee the project would be stopped. If the Board of Commissioners signed the letter, it would be sent to the RPO for consideration. If the RPO decides to recommend the No- Build Alternative, they will send it to the NCDOT for their final approval. The NCDOT will determine if the project will move forward or not.

The Commissioners expressed that the No-Build Alternative comes with a risk that the project could still move forward as initially proposed by NCDOT with the 12-foot lanes and six-foot paved shoulders, and the agreed compromise could be off the table. The citizens overwhelmingly expressed their support for the Board of Commissioners to move forward with approving a No-Build Alternative letter as the preferred option.

Polk County would like to thank everyone involved, including the citizens, RPO staff, and NCDOT staff who have attended meetings during this process. NCDOT has been very accommodating and met with staff, Commissioners, and citizens when requested and listened to their concerns.