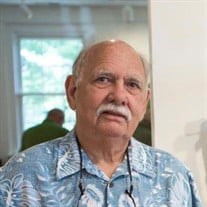 Traveler’s Rest— Gary Lee Huntoon, potter and teacher for over 60 years, passed away on September 5, 2022 at the age of 81 in Travelers Rest, South Carolina. He had recently been diagnosed with aggressive
cancer and died peacefully at home with family beside him. Prior to his passing, he welcomed family, friends and students to his bedside to share stories, music, humor, farewells and thankfulness. He was much loved and will be greatly missed.
Gary is survived by his wife of 30 years, Mary Lou Huntoon, his daughter Stacey Huntoon; his stepdaughter Nancy Hughes and her husband Tony, son Jamie and daughters Amanda and Sarah; his stepson Steve Asper and his wife Rhonda, sons Dalton and Carson; his sister Lou Ann Dien; and his two nieces, two nephews and four great-grandchildren. He is predeceased by his parents, his brother-in-law Rudy Dien, and his first wife Mary Ann Huntoon.
Born February 7, 1941 in Glendale, California to George and Marie Huntoon, he then moved with his parents and sister to Pasadena at age four. At his father’s side in the auto-body shop Gary learned the importance of craftsmanship and made creative use of the tools he was given, which was invaluable in his later work with clay. It was his first ceramics class while a pre-med student at UCLA that fired his passion and set a new path in pottery.
In 1962 he was selected to study at Pond Farm in Guerneville, Ca. with Marguerite Wildenhain, one of the first students at the Bauhaus in Germany who went on to become Germany’s first female Master Potter. His previous experience in clay had all been hand-building and it was at Pond Farm he began work on the potter’s wheel.
Following this influential time at Pond Farm, Gary moved to Texas, working for an architect as a potter, and then studying at the University of Texas before serving two years in the U.S. Army. He
established his pottery studio and began his teaching career in Houston at the High School for Performing and Visual Arts, and then at the Houston Museum of Fine Arts School and the University of St Thomas. He remained in Houston for 30 years and then moved to Dallas where he taught at Collin County Community College, Richland Community College, Parish Episcopal School and the Creative Arts Center of Dallas. While in Texas, Gary was very active in the Texas clay community, exhibiting his work and conducting workshops. He also worked for two years with the Alabama-Coushatta Tribe in East Texas, teaching pottery to these basket-makers.
After he and Mary Lou moved to South Carolina in 2011, he maintained his studio at their home in Travelers Rest while teaching at the Spartanburg Art Museum and Greer Arts Center. Gary was a member of the Greenville Center for Creative Arts and one of the early ceramics’ instructors when the Center first opened. He was a member of the Art Gallery on Pendleton Square in Pendleton,
SC and was active in the Tryon, NC arts community and a member of Tryon Painters and Sculptors. He was an inspirational teacher, encouraging his pottery students with enthusiasm, generosity and kindness, and he enjoyed conducting various workshops throughout these communities.
He was also active with Empty Bowls in Texas, South Carolina and North Carolina, a movement by artists and crafts people around the world making bowls to raise money for food-related
charities.
Gary worked in several styles and forms, from the functional to the whimsical, to elegant black forms and totems. His work is primarily in porcelain, although his elaborate sculptural pieces are made of stoneware clay. He exhibited across the United States in many galleries, museums and shows, winning awards in Texas and the Southwest, as well as in North Carolina and South Carolina. He was always creative in finding new things to do in clay: “Every day that I work I learn something new. That is the wonder of art and ceramics.” He wanted his pieces to have a strong, unique and timeless quality, for now and a hundred years from now.
Gary attended St Anthony of Padua Catholic Church in Greenville. No formal memorial service is planned, but his life will be celebrated by family and friends at a later date. He will be remembered always, not only for his work, but also for his love of music, love of life and the people in it.