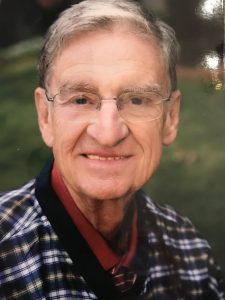 Born in Syracuse, New York, he was the son of Robert Henry Fritz and Shirley Normand Fritz. In addition to his parents, he was predeceased by his brother Robert Kent Fritz.

Bruce served with the U.S. Army in post-war Korea.  Upon his return, he married Joan Newman, with whom he had two sons.  He was a graduate of Syracuse University with a degree in Special Education.  He was employed part-time by Kemper Insurance while finishing his degree and continued full-time employment with them for 42 years until his retirement in 1997.  He became Vice President of Commercial Lines Marketing for the Kemper Insurance companies, having worked in Syracuse, Seattle, and Charlotte, and ultimately the home office in Long Grove, Illinois.

He and his second wife Elaine Jenkins moved to Tryon in 1998.  In retirement, he continued to enjoy golf and playing bridge.  He also worked with Habitat for Humanity for several years.

A family celebration of his life will be held at a later time.

Donations in his memory may be made to Hospice of the Carolina Foothills, Habitat for Humanity, or a charity of your choice.