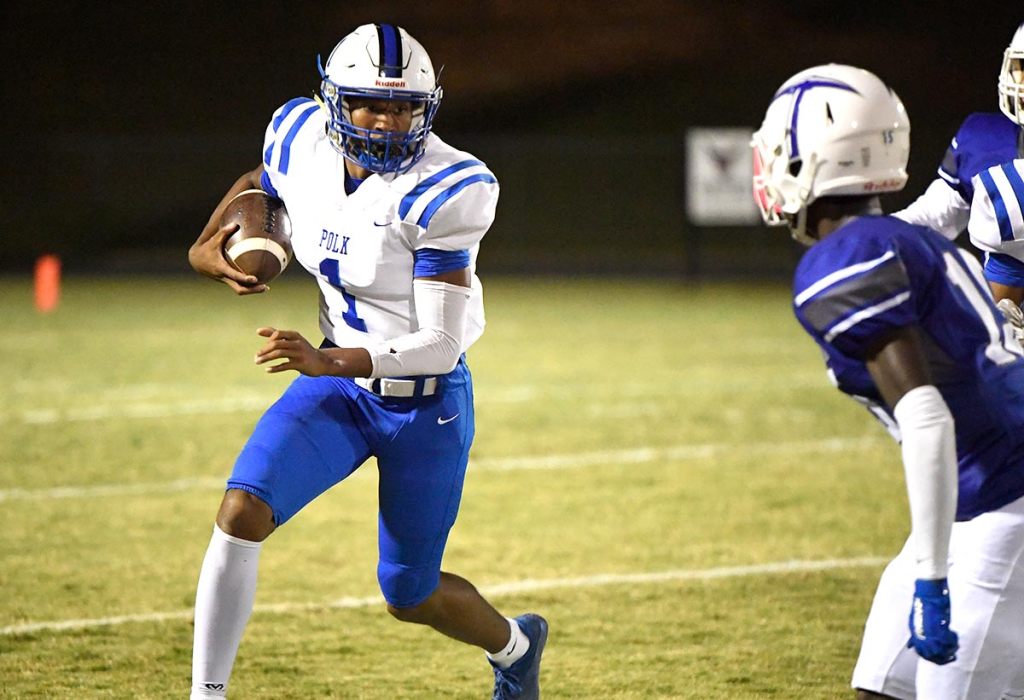 RUTHERFORDTON – A holding flag midway through the third quarter Thursday evening left Polk County facing a 2nd-and-22 at its 20.

As officials stepped off the infraction, a voice shouted from the Wolverine sideline, “Now they’re in trouble.”

Given how R-S Central’s pass defense fared during the evening, perhaps that wasn’t the boldest of statements.

But it certainly proved prophetic. On the next play, Polk quarterback Casey Beiler tossed an 80-yard touchdown pass to Antonio Simpson, igniting a scoring flurry that anchored a 42-21 Mountain Foothills 7 Conference victory in Hilltoppers Stadium.

The threat of rain Friday from the remnants of Hurricane Ian led to the game being played a day earlier than scheduled. The threat of possible additional injury to an aching shoulder led Polk County coaches to keep two-way standout Angus Weaver on the sidelines for the evening.

With Western North Carolina’s leading rusher not available, Polk County (4-3, 2-1) doubled down on its passing attack, and with great results. Casey Beiler threw for 305 yards and four touchdowns, with Simpson and Keaundae Green each catching two scores while topping the 100-yard mark receiving.

“I think that’s great for our team’s confidence,” Ollis said. “Angus, and I don’t think I’m saying anything here that is a big secret, is our best player, probably on both sides of the ball. But to have him be out tonight and see these kids play the way they played and to get a victory in the conference is huge for us.

“We were pretty dynamic on the edge tonight, and that gives us another dimension.”

An Obed Najera fumble recovery – R-S Central had four turnovers in the game – gave the Wolverines possession at their 30 following the Beiler-to-Simpson bomb. A 30-yard strike to Green and a Simpson 15-yard catch helped move Polk to the R-S 1, and Beiler scored from there on a sneak. He added the 2-point conversion for a 35-14 Polk lead with 11:24 left in the fourth quarter.

Polk stopped R-S on a fourth-and-eight on the Hilltoppers’ next drive, and Simpson again tormented the R-S secondary, catching a pass in the flat, evading one defender and outrunning another for a 51-yard score. Logan Nodine’s point after made it 42-14 with 7:33 to go.

The Hilltoppers added a late score for the final margin.

The evening began with the unlikeliest of 1-2 punches. On the first play from scrimmage, R-S Central senior Malachi Coston took a pitch to his left, cut back to his right and rumbled for a 42-yard gain that would have been longer save for a holding penalty. On the next snap, though, a bobbled handoff put the ball on the ground at Simpson’s feet, and the senior scooped it up and raced 65 yards to the end zone. Nodine’s extra point made it 7-0 with just 32 seconds elapsed on the game clock.

“I don’t think I’ve ever seen so much momentum change in the first two plays of a game in my career,” Ollis said. “Tony just made an above-average play. Ball’s on the ground and he scoops it up, and if he’s got a step on anybody, he’s gone. Nobody’s going to catch him.”

R-S Central (2-5, 0-3) fumbled again three plays into its next drive, with Gabe McCraw recovering at the Hilltopper 33. Polk covered those 33 yards in nine plays, Green catching a short toss from Beiler and strolling into the end zone from the 9, upping the advantage to 13-0.

The game then evolved into what felt like a repeat of Polk’s effort two weeks ago against Patton. R-S Central drove 52 yards for its first score, a Coston 22-yard run, then fashioned a 13-play, 71-yard epic that lasted more than seven minutes. Coston capped that drive with a 10-yard scoring sprint, and Max Lozano’s point after gave the Hilltoppers a 14-13 lead.

The Wolverines, though, quickly answered, with a Green 38-yard reception soon followed by a 41-yard Green catch-and-run to the end zone, returning Polk to a 19-14 lead with 1:48 left in the half.

“I told (assistant coach Jamie Thompson) this is Patton all over,” Ollis said. “I said we’ve got to find a way to stop them rushing the ball.

“We took the ball away some, and I don’t believe we had a turnover. Any time you don’t turn the ball over and you move the ball on offense and you play pretyy good defense, you have a chance to win.”

Beiler hit 14-of-19 passes for the second 300-yard game of his career. Simpson had five catches for 170 yards while Green had seven for 129.

Not a bad night for an offense missing its workhorse.

Next up – two weeks to prepare for an Oct. 14 showdown at Chase.

“We got some players back and they added to our success tonight,” Ollis said. “It’ll be good to heal up some next week and get ready for our next game in Forest City.”