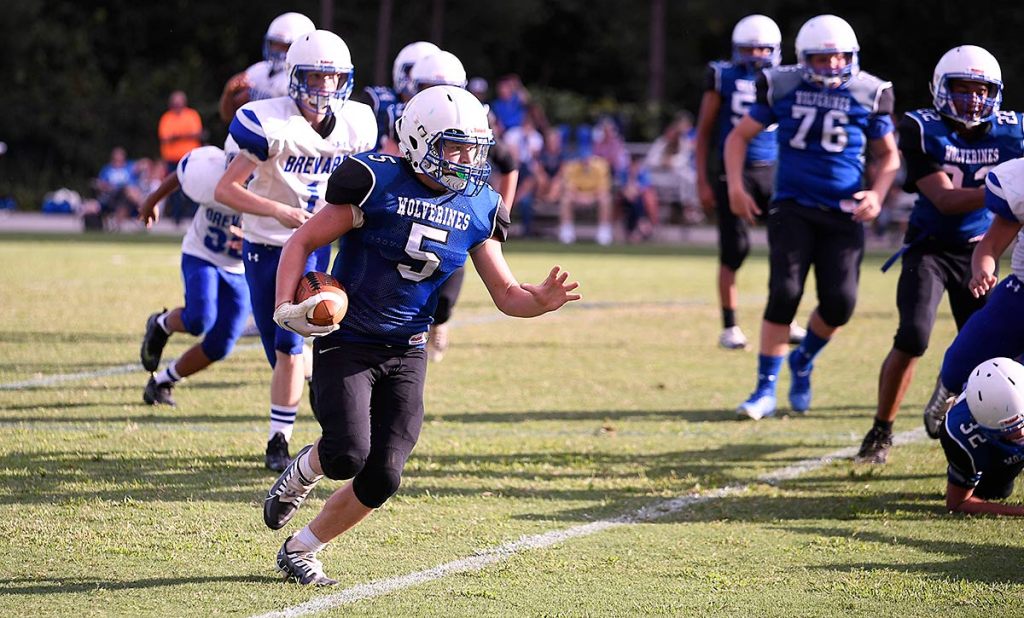 Polk County Middle’s biggest win of the season came down to the smallest of plays.

The 2-point conversion that the Wolverines made and the one they kept Rugby Middle from making ultimately settled the outcome Wednesday in the Wolverines’ 20-18 win at West Henderson High School.

Polk Middle (5-0) clinched a share of the Blue Ridge Conference East Division title with the win, and the Wolverines can secure sole possession of their second straight division crown next Thursday at home against Hendersonville Middle.

The Wolverines held a 20-12 lead entering the final stages of the fourth quarter, but a fumble with three minutes remaining gave Rugby possession at its 35 and set the stage for some last-minute drama.

The Raiders (3-2) have as good a passing attack as can be found at the middle school level, and Rugby mixed that with long runs by Duke Nitcher and Bryson Baker to cover the 65 yards in just over a minute, scoring with 1:53 remaining.

That left the Raiders needing the 2-point conversion for the tie, but Polk’s defense swarmed into the backfield and forced a fumble, recovering the loose ball to preserve the lead.

Polk then corralled Rugby’s onside kick attempt, and runs by Zach McCraw and Styler Blackwell gave the Wolverines the one first down they needed to run out the clock.

“Rugby this year has a high-powered offense. They’re polished for a middle school team the way they can run and throw it,” said Polk Middle head coach Ethan Edwards. “They keep you on your toes. You never know if they’re going to throw it to the flats, run it inside, run motion. It’s hard for middle school guys to key in on that motion.

“I’m really proud of the reads we made. Really proud of our secondary and the way they handled things. That’s the first real test they’ve had since Apple Valley, and I would say that’s a much better passing attack than Apple Valley had. We didn’t get beat deep.”

Edwards expected the game to unfold with long Polk Middle drives, the Wolverines relying on the run, and Rugby to score quickly with its offensive prowess. The opposite largely held true.

Rugby opened the game with a 12-play drive that lasted most of the first quarter, but a key Sam Rhein sack helped push the Raiders back near midfield and stop that possession.

The Wolverines needed just two plays to score, with Blackwell breaking free up the middle for a 50-yard touchdown jaunt, giving Polk a 6-0 lead with 1:39 left in the first period.

The Wolverines again scored and again did so quickly, with Blackwell breaking tackles and shrugging off would-be tacklers on a 54-yard run. That gave Polk a 12-6 lead that would stand until the half.

The Polk defense stopped a Rugby scoring threat late in the third quarter, keeping the Raiders out of the end zone after they reached the Wolverine 7. Polk took possession on its 19 and needed just four plays to score, with McCraw ripping off a 64-yard scoring run.

Polk’s Sawyer Huff then raced around the right end to add the key 2-point conversion, giving the Wolverines a 20-6 lead with 35 seconds left in the third period.

Rugby answered with a six-play, 53-yard drive to score on a Nitcher 18-yard pass reception, cutting the Wolverine lead to 20-12 and setting the stage for the late drama.

“We reversed scripts. We thought they would make big plays and we would control the clock,” Edwards said. “We score two plays in, which I’m not going to complain about.

Blackwell finished with 134 yards rushing on 11 carries while McCraw had 126 yards on 12 carries.