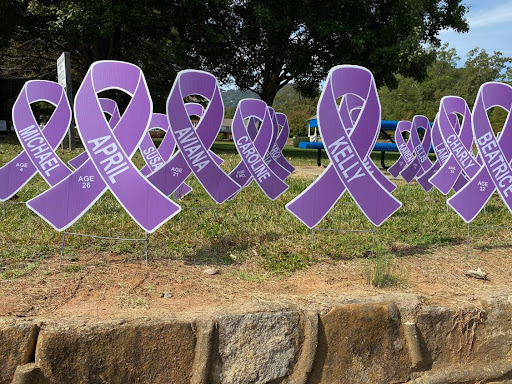 October is National Domestic Violence Awareness Month and Steps to HOPE is committed to spreading awareness in our community like never before.

Purple banners will be raised on flag posts throughout the downtown areas of Landrum, Columbus, Tryon, and Saluda with informational slogans and statistics featured on each. Purple ribbon signs will be displayed at Stearns Park in Columbus, on the hill in downtown Tryon, Steps to HOPE Thrift Barn in Landrum, and McCreery Park in Saluda. Each purple ribbon sign will bear the name of a North Carolina victim and his or her age at the time of death in white lettering. His or her photo and story regarding their death will be featured on the back. Names, photos, and stories of local residents who have lost their lives from domestic violence-related incidents since 1981 will also be spread at the same locations – their names appear in black.

Domestic violence is all too frequently kept a secret. The possibility of being able to reach victims through an innocent coffee sleeve can make all the difference in saving a life.

“These calls are from people in our own community seeking help and guidance to escape from a difficult and often dangerous situation,” Executive Director, Diane Nelson, stated. “It takes courage to make that call, to take the first step. And that’s why we are here…so they don’t have to do it alone.”

So far this year in North Carolina, 28 homicides can be attributed to domestic violence. Victims range in age from 8 months to 79 years. Domestic violence knows no age limits, no socio-economic status, no race, no religion, and no distinction between males and females. According to the National Coalition Against Domestic Violence (NCADV), on average, nearly 20 people per minute are physically abused by an intimate partner in the United States. During one year, this equates to more than 10 million people, or 1 in 4 women and 1 in 9 men who experience severe intimate partner physical violence.

Please visit one of Steps to HOPE’s purple ribbon locations in Columbus, Tryon, Saluda, or Landrum to remember those who have lost their lives.  These victims were someone’s mother, daughter, father, son, child, friend, and/or neighbor.  They deserve to have their lives remembered and their stories told.