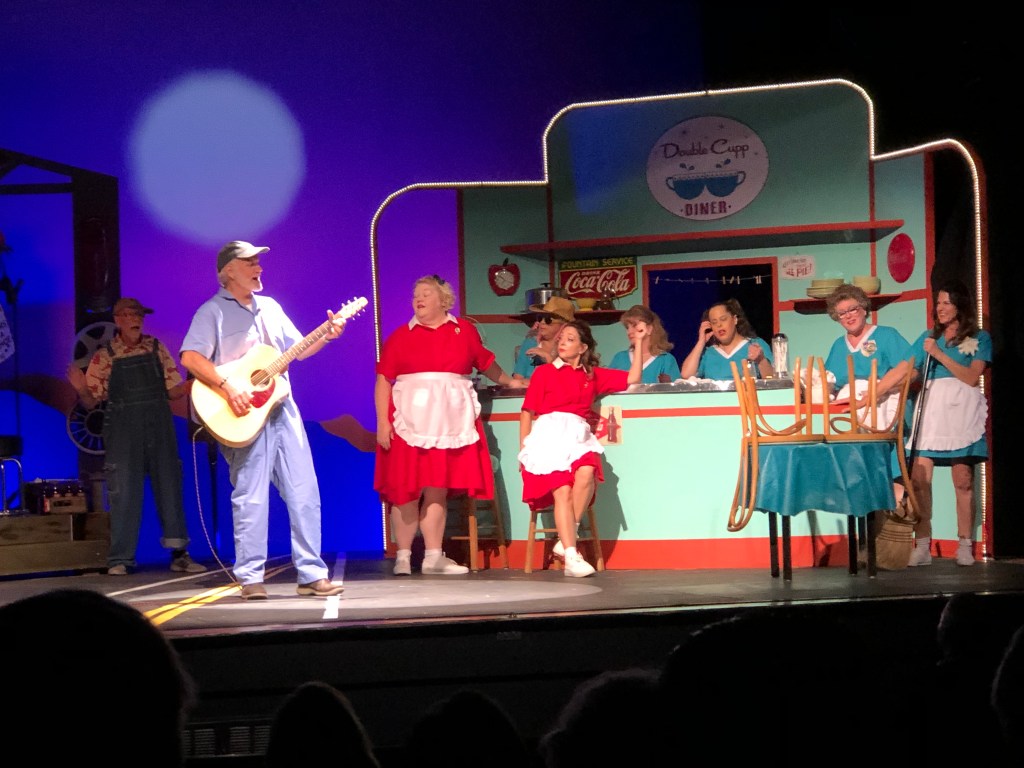 Lively music filled with verve highlights Pump Boys and Dinettes. Tryon Little Theater’s musical is on stage at the Tryon Fine Arts Theater this weekend only.

Somewhere on Highway 57 in a North Carolina small town is the Double Cupp Diner. Across the road is an unnamed gas station. The workers in both locations observe each other daily from across the way. The men in the gas station and women in the diner play off of each other through country music and song.

At one time, this forgotten musical was featured on Broadway in the early 1980s to moderate success. It was even nominated for a Best Musical Tony Award and several Drama Desk Awards. It was concocted by two friends Jim Wann and Mark Hardwick from their experiences within a New York restaurant. Over time, it expanded into Pump Boys and Dinettes—which is the name of the singing group.

The audience on opening night of Tryon Little Theater’s production was largely in love with the show as a whole. The musical direction by Pam McNeil, the singing, and the band was top-notch. McNeil even played the keyboard as a Pump Boy with gusto.

Director Carol Cox deserves major credit, as there is clearly a positive vibe surrounding the production which allows the audience to simply enjoy the show.

There were a few standout actors including Lori Lee who has great stage presence and Cindy Kennedy who showed skill and reservation by not pulling focus in the background. However, it is country Pump Boy Mark Sawyer who is perfectly subtle and manages to hold it all together. It is easy to imagine finding his character at a random garage or honky-tonk on some back road. He conveys a man beaten down by life but living in the joy of the moments as they come.

Theater of any kind needs our support more than ever right now. This musical is recommended to those that enjoy simple and fun entertainment.

What: Pump Boys and Dinettes