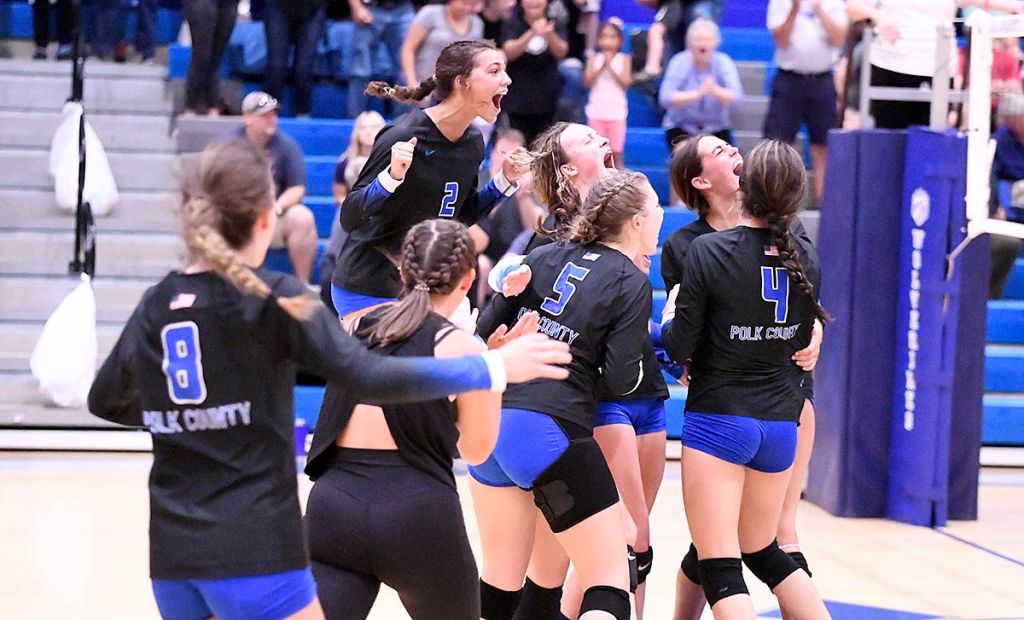 There were the obvious swings, the kill attempts that Brevard’s high-flying offense kept delivering.

And then there were the swings of momentum, subtle shifts often spurred by a defensive save or a strong round of serving that defined Tuesday’s matchup of two of the state’s top 2A volleyball teams.

Polk County produced more of those – and for now sits alone atop the Mountain Foothills 7 Conference as a result.

It was high school volleyball at a high level, two heavyweights standing toe-to-toe and slugging it out for some two hours. They’ll do it again at season’s end, possibly again in the conference’s postseason tournament and maybe even down the road in the 2A playoffs.

If any of those matches are as good as Tuesday’s, what a treat awaits.

“We played really well,” said Polk County head coach Molly Hill. “We had a few girls that were nervous, but I really tried to channel that into a positive energy type of thing and just excitement.

“We knew going in that they were a good team and that it was going to be a battle, and I felt like we really did that.”

Brevard opened leads of 3-0 and 5-4 before one of those momentum shifts occurred, Polk’s Sophia Overholt blasting a perfect set at the net to even the match, then adding two more kills to give the Wolverines a 7-5 advantage.

The margin swelled to 10-6, but Brevard eventually fought back to within a point at 12-11, a Meleah Foster block giving the Devils the serve and a chance to tie.

But Elena Carroll put down a kill from the right side, and Ada Kelley followed with a push shot that couldn’t be returned to move Polk to match point. That fell in the Wolverines’ favor, appropriately, on a defensive gem – Mia Bradley and Morgan Yoder teaming for a block of a Brevard kill attempt.

“In that fifth set, we were point for point, and then we just sailed and went and it was good,” Hill said. “Sophia had those three kills in a row and that was the turning point for that set.

“Our blocking kind of struggled at first, but we adjusted and moved our block a couple of ways. We changed our defense completely and we were able to adjust and work well together.”

The final-set drama might not have been needed, though, had it not been for some first-set resolve shown by the Wolverines.

Polk raced to an early 6-1 lead, but Brevard rallied to even the set midway through. The Wolverines inched back ahead and had two set points at 24-22, only to see the Blue Devils reel off three straight points for a 25-24 lead and their own set point. 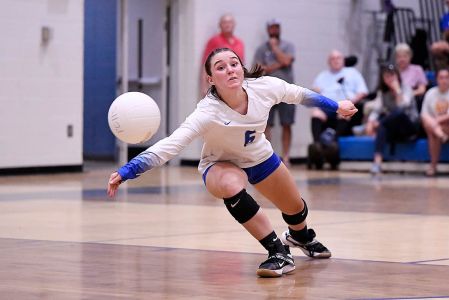 That one nearly went to Brevard, but Ella Waldman scrambled to save a Blue Devil kill, leading to a Yoder blast. At 26-all, Yoder then delivered back-to-back kills to give the Wolverines the set and early lead.

Brevard hit and served especially well in the second set, leading throughout before winning it. Polk, though, responded by building a 12-5 advantage in the third set, weathering a strong serving run by Brevard’s Abby Pace and then sealing the set on a Bradley kill.

The third set proved doubly challenging for the Wolverines as junior setter Zaelea Eller left the court with a health issue and didn’t return. That meant Bradley had to shift into the setter’s role on some rotations.

“Mia really stepped up,” Hill said. “We had to do that with Mia last year when Zaelea got hurt and I kind of just threw her in there. Tonight, same thing, and Mia’s ready. She loves getting the opportunity to set, so it was a win-win. She stepped right in and did great.”

The fourth set mirrored the third, but in the Blue Devils’ favor as they built an early lead and maintained that throughout, leading to the decider.

There will be little time for Polk County to celebrate, though – a challenging road trip to Patton on Thursday awaits. That will start Polk’s second pass through its MF7 schedule, a journey that will culminate in an Oct. 13 rematch at Brevard.

“I told them, you’ve taken over the conference right now, now we’ve just got to maintain it,” Hill said. “We’ve got to go and play everybody again and just keep it up.”