Polk roars back from early deficit to subdue Patton 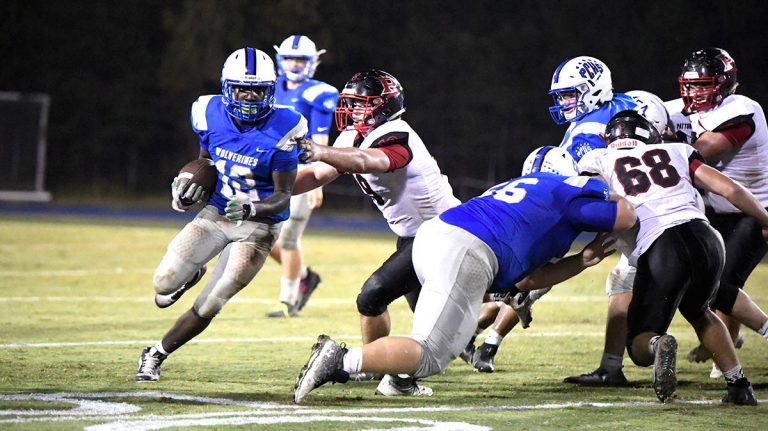 No bands, cheerleaders taking a break, Polk County fans mulling the turn of events that left visiting Patton with a perhaps unexpected lead at the break. Certainly a bit of a nervous silence in the home stands.

Proved to just be the calm before the storm.

A halftime defensive adjustment and a healthy dose of Angus Weaver proved the remedy for the Wolverines’ early woes, Polk County roaring back for a 41-20 victory in its Mountain Foothills 7 Conference opener.

Patton (0-5, 0-1) may have arrived at Tennant Stadium without a win, but the Panthers were the better team for the first 24 minutes in large part because they held the ball for most of them. Relying on a methodical, plodding rushing approach, Patton engineered a scoring drive of almost eight minutes for its first score and added two other touchdowns in taking a 13-point lead in the second quarter.

Polk (3-2, 1-0) cut that lead to seven just before an intermission that proved welcome and vital. Defensive coordinator Jamie Thompson made one change in how Polk’s defense attacked Patton’s running game, and a Panther offense that racked up 229 yards un the ground in the first half had just 83 yards in the second.

“We challenged them at halftime,” said Polk County head coach Bruce Ollis. “Nobody ranted and raved. Nobody was upset. I just said, men, here’s an opportunity for us to show people that we can come back. We’re down, they’re playing awfully well, we’ve got to play better to win.

“We flipped the switch a little bit and pitched a shutout in the second half. Jamie came up with a great plan to not run our backside linebacker when they pulled, and he was home when the quarterback kept the ball on the rip play.”

Polk’s offense, meanwhile, shifted into fifth gear, as in handing the ball often to No. 5. Weaver finished the evening with a career-high 244 yards rushing with four touchdowns and added to his growing collection of school records, snapping Jamal Tanner’s previous marks for most rushing attempts in a career (old mark, 489; Weaver now, 508) and rushing touchdowns (old mark, 44; Weaver now, 47). The senior had a pretty good night, 15 carries for 169 yards, in just the second half.

But two key plays early in the third quarter came from other Wolverines. On its first drive of the third quarter, Polk faced a third-and-4 at the Patton 31. Quarterback Casey Beiler dropped to pass, but faced immediate pressure. Beiler spun away from the rusher, then began to scramble, stiff-arming a would-be tackler to the ground and eventually reaching the 19 for a 12-yard effort and a first down. That led to Weaver’s four-yard run that evened the score at 20-20 with 8:29 left in the third.

Patton began another march on its ensuing possession and were heading inside the Polk 20 when Beiler forced a Trevor Smith fumble, leading to a scramble that Polk’s Evan Jones eventually won, recoving the ball at the 15. Weaver scampered for 46 yards on the next play, then turned a screen pass on fourth-and-8 at the 37 into a 24-yard pickup. Karlen McEntyre followed with a 13-yard scoring run, and suddenly Polk led 27-20 with 2:42 left in the third and had momentum fully clad in blue and white.

Perhaps the game’s final turning point came midway through the fourth period. A fumble at the Patton 7 stopped a Wolverine scoring threat, and the Panthers inched away from the end zone to face fourth-and-3 at their 14. After a timeout, Patton decided to go for the first down, but Smith’s carry was stopped inches short of the first down. That gave Polk the ball at the 16, and the Wolverines casually covered those 16 yards in five plays, with Beiler sneaking in from the 1. Logan Nodine’s extra point made it 34-20 with 2:34 remaining and Polk fans could finally exhale.

“I told (Patton head coach and former Polk assistant Mark Duncan) after the game that they had a great plan for us,” Ollis said. “They came out and they executed well. They did everything they had to do to be successful and they played keepaway (Polk had just 13 offensive plays in the first half).”

Its four-game homestand complete, Polk County now begins a trek of three key conference road games, the first of those next Friday at Hendersonville.